I must have drifted to the seashore now .. timidly dipping my toes in the turquoise water ..
No signs of UFO's around ..but some grey clouds in the horizon ..
Nicely surprised but a little cold here .. Maybe a sunnier ivory background next to that blue would warm me up..

Love from me
mudra
mp3

Lighter backgrounds and darker text lettering, work better for my eyes. Light letters on dark background make my eyes tired very quickly. One of my issues with Avalon the whole time was the way letter colours which work well as contrast in one skin, could be virtually invisible in another. There were several posters in Avalon who chose colours which worked in the blue skin, but since I used minty skin, were unreadable, unless I changed skins for those posts. I ended up having to skip a lot of posts, from people I'd like to have followed. I pointed it out dozens of times, but it remained a problem.

I don't know if there is some way for colour co-ordination to work. Because otherwise the same thing will happen here. I saw where one poster here mentioned a darker skin with lighter letters worked better for them. I'm the opposite. I guess we'll see. Be nice if everyones offerings were visible to everyone interested.

As an example, this current skin is in shades of grey. In the places where white letters sit on the lighter grey background, I have to strain to make out the lettering. If whole posts in this grey skin were in white letters, I'd have to skip the post. Some colour combinations on Avalon would become visible when you highlighted the text, but in other combinations, it failed to improve the contrast, or even made it worse.
Carol

I prefer dark text on light skin as well.

And the lavenders in Kerry's new website are my favorite.
_________________
What is life?
It is the flash of a firefly in the night, the breath of a buffalo in the wintertime. It is the little shadow which runs across the grass and loses itself in the sunset.
With deepest respect ~ Aloha & Mahalo, Carol
SuiGeneris

I loved the awesome blue and grey one. Was that the "Galactic" theme? Love the name btw!

I like dark background because the luminescence that comes out of the screen itself is too much! especially at night when I only have indirect light on.

Thanks for today's skin Mercuriel .
It 's an easy one to navigate through and pleasant too .

Love from me
mudra
Tatiana

Haven't had much time to hang out here recently and so I was really surprised to read about all the changes here like the new skins - is there a way to try them out yet or will we be able to do so later? I looked everywhere and didn't find anything about skins.

Wanted to take this opportunity to thank you all again for all those hours spent to make everyone comfortable and to make the mists a beautiful experience! Many blessings to you!

For those that may have not noticed, I'm sure there are entire categories that you don't visit or don't visit regularly.

On the category bar ( the blue bar ) there is a minimize icon on the right. You can minimize an entire category and it simplifies your browsing experience and the need to scroll.

Just thought I'd share, in case anyone hadn't noticed.
Mercuriel 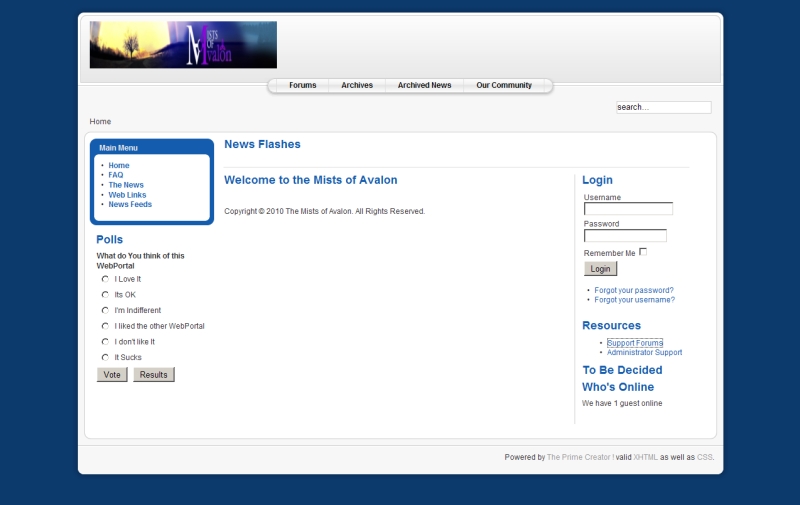 Just a little Tease so Y'all know I'm not loafing about...

Your love and dedication is
Much
appreciated

Love for You
mudra
Floyd

Just sos Y'all know - I'll be putting up some more Screens of the WebPortal later on tonight - Early morning.

As the WebPortal developes - And it will develope quickly now that I've gotten the Portal up and functioning as designed - Screens will be put up in this Thread at various points to show It's movement in stages towards a WebPortal We can All appreciate.

Hope all is going well

This is exciting Mercuriel.. it feels like Christmas is coming early this year. Of course it is snowing outside again today so Christmas is what comes to mind.

_________________
What is life?
It is the flash of a firefly in the night, the breath of a buffalo in the wintertime. It is the little shadow which runs across the grass and loses itself in the sunset.
With deepest respect ~ Aloha & Mahalo, Carol
Floyd 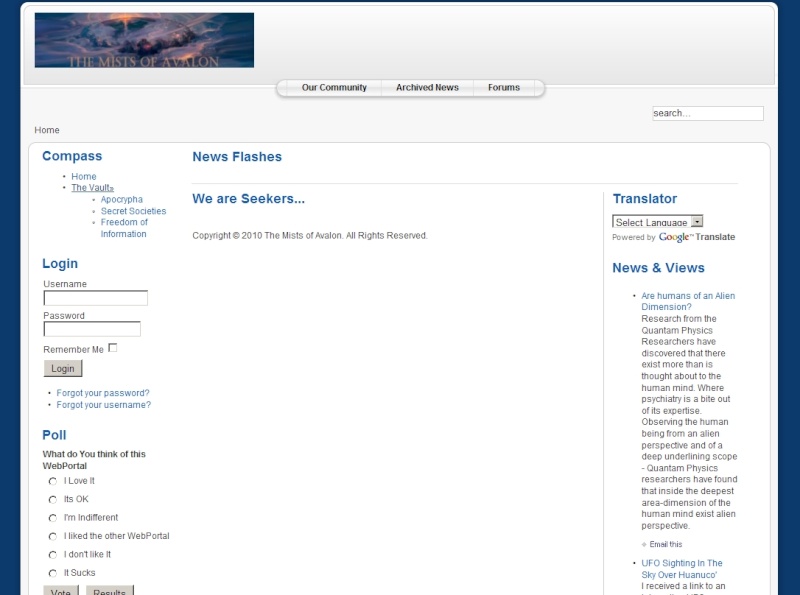 
Love for You
mudra
Mercuriel

I had to work the past Three Days but I am now on a week off and prep'ed to do this.

I have purchased the Domain Name. We own It totally now. I am just waiting for the DNS and Nameserver Information as well as the Transfer Code.

I hope to have that tomorrow. Then once I have that I will set up an Account for Us at Godaddy where We will then be able to point It at Our WebSite when I finally do It VIA a Web Interface They provide to point the Domain Name at Our WebServer.

Once that is set - I have a call in to Invision tomorrow in which I'll have them professionally install the Forum for Us and set Us up.

When that is done - I will install RokBridge to be a Catch-All Login so that when You Login - It is Site wide.

This is where I hope to be with all of this by Wednesday Morning. I will then enter the Forums here and make the Announcement that going Live is Imminent, and that Our present Portal may be down for anywhere from 12 to 24 Hours to do the transfer (More about that when It happens).

Thank You Mercuriel
You are simply awesome !!!

Love for You
mudra
Mercuriel

As I've remembered It...

"I bow to You All in the Spirit of Peace, Light, Love, Harmony and Unity and when I bow to You in that Spirit and You in Me - Then Indeed We are One..."

Thank You so much for all the work you've done!
I eagerly await the transition.

We Officially own it...

The Mists of Avalon is now Incarnate and Mentally in the Reality as an understood Construct...

Well done on You Mercuriel

Love and gratitude for you
mudra

Thank you so much for all of the work you are doing to make this possible. Blessings to you brother.
_________________
What is life?
It is the flash of a firefly in the night, the breath of a buffalo in the wintertime. It is the little shadow which runs across the grass and loses itself in the sunset.
With deepest respect ~ Aloha & Mahalo, Carol
Mercuriel

> The Domain Name transference is going slower than Molasses on Pluto. I am currently trying to get enough Information out of Forumotion to be able to take Control of the Domain Name in order to point It at Our New WebServer. This is not occurring as fast as I had hoped as all they have given Me is an Authorization Code and We need more than that to be able to do this. That said - I am efforting this around the Clock but see comment about Molasses again when You think of what I am dealing with on the remote end.

> I have since found out that given certain Information that We could get the MySQL - I have now been told by one of the Head Admins at Forumotion that Our MySQL cannot be copied and given to Us due to the Configuration They use in running the Forum Hosting for All of the Forums that They run.

So lets say that We are at an Impasse in some ways and not in others. We have the Domain Name (No worries - I will clear that up) but what Our real Issue as a Community is, is this. Is this Community willing to allow the upgrade now with what will have to be done again.

Now One would say - What would this entail ?

Well - AdMods or whoever was willing to help AGAIN (Members don't have to at all as We would do It this time but help would be great to be sure) would have to copy all Posts over to the New Forums.

AdMods (Me - LOL) would also have to Migrate All Members and Their Profiles over to the New Digs Manually (More about how that would be done later if things are still a go after Feedback).

And other Issues of what We have here in terms of Details would then have to entered into Personal Member Profiles once They'd logged into the New Site and were able to access Their Profiles to do so. They would only be set as a Member - Active - and with a PW of Their choosing VIA PM to Myself before doing It. They would then log in and add or change what They needed to about Their Member Profiles.

Lots of Ideas. We could use this Forum - Do nothing in terms of transferring It - And Link to the New Digs under another Name. Its all up to You My Brethren - We all choose the Steering of the Ship. I await any Comments...

Thank you for the update Mercuriel .
We need to stir wisely .
This community is nicely growing but is'nt so stable yet .
If the changes suppose we all have to register again I am afraid we 'll loose members in the process.
And the admin work of moving posts and threads manually is now so much bigger due to forum growth
than it was from the Mists.
In the light of what you posted I have no clue for how long the forum would be closed before reopening .
Things have changed . We are now facing a major event in the Gulf that concerns us all .
I feel there is great need to stick together , share our ideas and get organized .
Somehow the clock is ticking . It's all a matter on where to put our focus now in the most effective way .
So I 'll say if the upgrade is going to be time consuming and if we are liable to loose members let's leave
it for now and work our best we what we have and that is functioning well .
If this is not the case than I am willing to help in what suits best and stick to my original decision of welcoming the upgrade.

Love from me
mudra
Go to page :