How Should One Properly Study Egyptology?? Perhaps a University Curriculum Might Be a Start. I Thought Better About a Red Pill Reposting Project Featuring Brook's Excellent Work. I Might Study These Threads Incognito.

What's the point of copy paste these threads of Brook here as they can be accessed anyway by those whose interest would lead them there ?
Just being curious.

mudra wrote:What's the point of copy paste these threads of Brook here as they can be accessed anyway by those whose interest would lead them there? Just being curious.

This was just a brainstorm, and it's probably a bad-idea. I should probably just study those two-threads, as you suggest, and leave well-enough alone. I just thought I needed to give them some attention, which might interest others who might not even know about these threads. But perhaps I've worn-out my welcome, and should simply engage in private-study for an extended length of time. I have some Ralph Ellis books I need to study, which might be followed by Bible-Study, to determine what the Truth of Antiquity really is. I won't continue this thread.
mudra

Actually I think this thread is a good idea Oxy :)

I timely came across the following book today which fits perfectly with the title of yours thread.
Just began to read it with great pleasure so far. 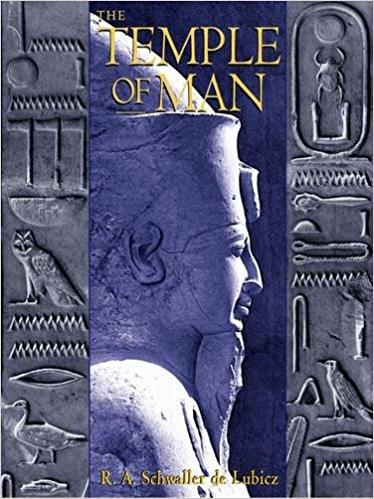 Two 544-page volumes, cloth with slipcase The monumental Temple of Man represents the most important breakthrough in our understanding of Ancient Egypt since the discovery of the Rosetta stone. This exhaustive and authoritative study reveals the depths of the mathematical, medical, and metaphysical sophistication of Ancient Egypt. Schwaller de Lubicz's stone-by-stone survey of the temple of Amun-Mut-Khonsu at Luxor allows us to step into the mentality of Ancient Egypt and experience the Egyptian way of thinking within the context of their own worldview.

His study finds the temple to be an eloquent expression and summary--an architectural encyclopedia--of what the Egyptians knew of humanity and the universe. Through a reading of the temple's measures and proportions, its axes and orientations, and the symbolism and placement of its bas-reliefs, along with the accompanying studies of related medical and mathematical papyri, Schwaller de Lubicz demonstrates how advanced the civilization of Ancient Egypt was, a civilization that possessed exalted knowledge and achievements both materially and spiritually. In so doing, Schwaller de Lubicz effectively demonstrates that Ancient Egypt, not Greece, is at the base of Western science, civilization, and culture.

To understand the temple of Luxor, twelve years of field work were undertaken with the utmost exactitude by Schwaller de Lubicz in collaboration with French archaeologist Clement Robichon and the respected Egyptologist Alexandre Varille. From this work were produced over 1000 pages of text and proofs of the sacred geometry of the temple and 400 illustrations and photographs that make up The Temple of Man.

The Temple of Man is a monument to inspired insight, conscientious scholarship, and exacting archaeological groundwork that represents a major contribution to humanity's perennial search for self-knowledge and the prehistoric origins of its culture and science.

Here is the introduction to the book by R.A Schwaller de Lubicz.
Just to give a taste of what it is all about.

The Temple of man

Egyptology in a Nutshell By Nanoo Nanoo

Some have claimed that Earth is an Alien-Laboratory. If this is true, it seems as if the Lab-Rats (us) took control of the lab (or were allowed to take-over) in antiquity, and things seemed to go downhill and/or become somewhat primitive. My theory is that the Aliens were us, and the Lab-Rats were a subset of us (or something like that). I must review my threads, and solidify some of my speculative religious and political science-fiction, even though this often seems to be a waste of time. This sort of thing never resolves, and is certainly not a marketable job-skill. I find this Robert Morning Sky video very interesting, but I have no idea how true it is. I try to combine this information with other versions of who we are, and where we came from.

The reason of my thumbs up to Nanu's post is that if there is such a thing as the past it should be studied in a holistic manner imho in all regions of earth and not one particularly.
Let's see if there is something that unifies them all before it separates them.
In that way I would look for simplicity rather than complexity.

Perhaps We Must Somehow Remain Divided and Conquered to Simply Survive. In many ways, I'd prefer to live in a Solar System with One God, One Law, and One Government, but this Trinity had better be a Good Group or we'd be in a HUGE Amount of Trouble. Actually, I suspect that we ARE in a HUGE Amount of Trouble. But Hope Springs Eternal. Consider the following video in connection with 1 Corinthians 15:24-28: Then the end will come, when he hands over the kingdom to God the Father after he has destroyed all dominion, authority and power. For he must reign until he has put all his enemies under his feet. The last enemy to be destroyed is death. For he "has put everything under his feet." Now when it says that "everything" has been put under him, it is clear that this does not include God himself, who put everything under Christ. When he has done this, then the Son himself will be made subject to him who put everything under him, so that God may be all in all.