£250,000 burger may not be to everyone's taste
It’s the burger that will weigh in at 5oz, has cost £250,000 to produce and could create a slice of history. The world’s first stem cell burger, which has been grown in a laboratory, will be cooked and eaten in London next Monday in an experiment which could lead to artificial meat in supermarkets within 10 years.

The meal has been made from 3,000 strips of artificial beef, each the size of a grain of rice.

Scientists are hoping the development will meet the growing worldwide demand for beef, lamb, pork and chicken. It is the brainchild of Mark Post, a medical physiologist at Maastricht University in the Netherlands.

“Right now, we are using 70 per cent of all our agricultural capacity to grow meat through livestock. You are going to need alternatives,” said Professor Post. “If we don’t do anything, meat will become a luxury food and will become very expensive.

“Eventually, my vision is that you have a limited herd of donor animals which you keep in stock in the world. You basically kill animals and take all the stem cells from them, so you would still need animals for this technology,” the professor told the Independent on Sunday

By 2050, according to the Food and Agriculture Organisation, the world will be eating twice as much meat as that consumed today.


Each Briton, on average, eats about 85kg of meat a year, which translates approximately into 33 chickens, one pig, three-quarters of a sheep and a fifth of a cow.

The Food Standards Agency said that before going on sale, artificial meat needs regulatory approval. “Any novel food, or food produced using a novel production process, must undergo a stringent and independent safety assessment before it is placed on the market.”

Y'know I hear the next Big Thing will be Artificial Air. Apparently - They're going to recycle it from Farts and use it on the Space Station.

Donations are now being accepted... 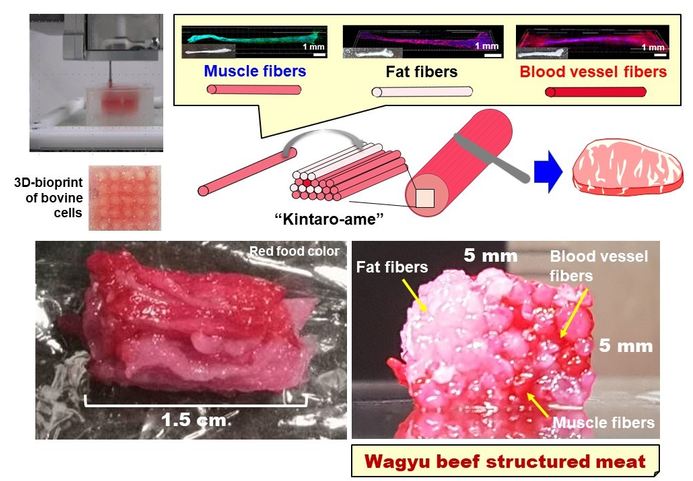 The ‘carbon neutrality’ of 3D printing food, especially meat, is a fast-moving trend in the culinary world that may be coming to a restaurant near you. The entire process of printing food is pitched as a “sustainable” alternative to commercial farming – which involves significant amounts of land, water, feed, and fossil fuels to operate anything from generators to farm equipment to transport trucks. Then, of course, the slaughterhouse, packaging, and then transport the finished product to supermarkets and restaurant suppliers.

Within the next five years, the cost to 3D print meat may have come down to the point at which supermarkets may start carrying lab-grown offerings. Readers may recall we’ve already mentioned 3D-printed ribeyes, chicken breasts, and chicken nuggets, among others.

Now, Japanese scientists from Osaka University have managed to 3D print wagyu beef, according to a press release.