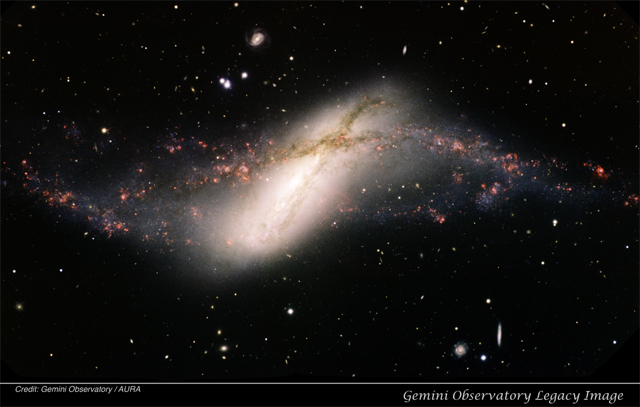 When the lamp is shattered,
The light in the dust lies dead.
When the cloud is scattered,
The rainbow’s glory is shed.
These words, which open Shelley’s poem “When the Lamp is Shattered,” employ visions of nature to symbolize life in decay and rebirth. It’s as if he had somehow foreseen the creation of this new Gemini Legacy image, and penned a caption for it. What Gemini has captured is nothing short of poetry in motion: the colorful and dramatic tale of a life-and-death struggle between two galaxies interacting. All the action appears in a single frame, with the stunning polar-ring galaxy NGC 660 as the focus of attention.

Polar-ring galaxies are peculiar objects. Astronomers have found only a handful of them, so not much is known about their origins. Most have an early-type spiral system, called a lenticular galaxy, as the central showpiece. But NGC 660, which lies about 40 million light-years distant toward the direction of Pisces the Fishes, is the only polar-ring galaxy known with what is called a late-type lenticular galaxy as its host. All, however, display a ring of stars, dust, and gas that extends tens of thousands of light-years across space along an orbit nearly perpendicular to the main disk.

Models of how polar-ring galaxies form offer two general formation scenarios: 1) a piercing merger between two galaxies aligned roughly at right angles, or 2) when the host galaxy tidally strips material from a passing gas-rich spiral and strews it into a ring.

What you see in this new Gemini Legacy image, then, is not a single dynamic body but either the “bloody” aftermath of one galaxy piercing the heart of another or the remains of a furious tidal struggle between two galaxies that shattered one galaxy’s “lamp,” scattered its dust and gas, and formed a colorful, 40,000-light-year-long ring of visual glory.