https://www.youtube.com/watch?v=fAbFrQpfGM0&feature=player_embedded
Extraterrestrials: Vital technology concealed says Paul Helleyer
The Honourable Paul Hellyer, who is a former Defence Minister, believes governments have knowledge from other worlds could save the planet. “I would like to see what (alien) technology there might be that could eliminate the burning of fossil fuels within a generation … that could be a way to save our planet,” Paul Hellyer, 83, told the Ottawa Citizen, as reported on Yahoo News. “Such alien technologies could offer humanity alternatives to fossil fuels,” he said. “We need to persuade governments to come clean on what they know. Some of us suspect they know quite a lot, and it might be enough to save our planet if applied quickly enough,” he said. Mr. Hellyer became defence minister in former prime minister Lester Pearson’s cabinet in 1963, and oversaw the controversial integration and unification of Canada’s army, air force and navy into the Canadian Forces. He formally made a public announcement in September 2005 that he once saw Extraterrestrial spacecraft. Paul Hellyer continues to raise public awareness on UFO-related issues into Spring 2012. 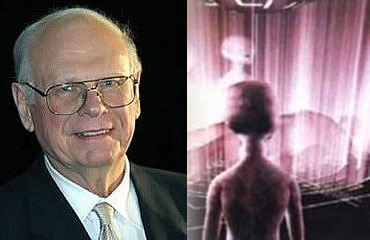 https://www.youtube.com/watch?v=H8iYh82s7J4&feature=related
"We are honored to be able to welcome a man of Hellyer's stature on Open Minds Radio. Beginning in 1963, Hellyer served as the Minister of National Defence for Canada. During this time he oversaw the unification of their Navy, Army, and Air Force into a single organization called the Canadian Forces. After his retirement, influenced by a Peter Jennings special on UFOs, Hellyer read Col. Corso's book, The Day After Roswell, in which Corso claims to have handled material from the Roswell craft. Hellyer confirmed Corso's story with an U.S. General. Already an opponent of the weaponizing of space, Hellyer has since chastised the U.S. for withholding the truth, and having an aggressive stance on the ET presence."
_________________
What is life?
It is the flash of a firefly in the night, the breath of a buffalo in the wintertime. It is the little shadow which runs across the grass and loses itself in the sunset.
With deepest respect ~ Aloha & Mahalo, Carol
Current date/time is Tue Apr 07, 2020 2:32 pm