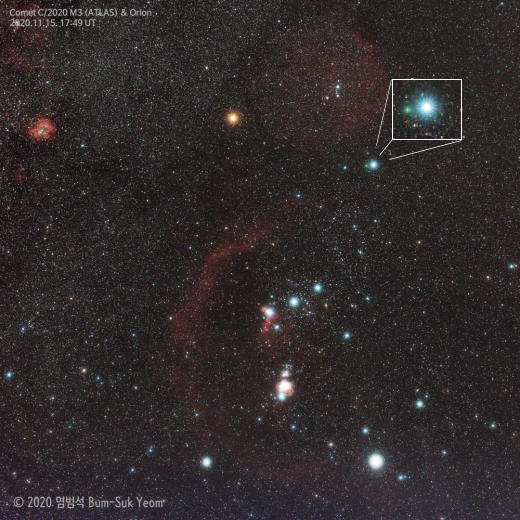 "The juxtaposition of blue and green against the black velvet background of space was really quite striking," says Yeom.

Bellatrix is blue because it is hot. Almost 10 times as massive and 10,000 times more luminous than the sun, Bellatrix has a surface temperature of 22,000 K. The juggernaut produces most of its starlight in the form of blue and UV photons. Comet ATLAS is green because it is cold and carbonaceous. The icy comet, slightly warmed by the rays of the distant sun, spews diatomic carbon (C2) into space--a substance that glows green in the frigid vacuum of space.

https://spaceweather.com
_________________
What is life?
It is the flash of a firefly in the night, the breath of a buffalo in the wintertime. It is the little shadow which runs across the grass and loses itself in the sunset.
With deepest respect ~ Aloha & Mahalo, Carol
Carol

SUNDIVING COMET ERASMUS: Comet Erasmus (C/2020 S3) will soon be inside the orbit of Mercury. Now passing Venus in the early morning sky, the brightening comet is an easy target for backyard telescopes. It may be visible for only a few more days before the sun's glare swallows it, so set your alarm for dawn and enjoy the show.

BIG SUNSPOT: A new sunspot is rotating over the sun's eastern limb. It is still not fully in view, but we can already see that it is big. The leading dark core is circled in this image from NASA's Solar Dynamics Observatory: Solar wind speed: 554.6 km/sec

The arrival of this sunspot has been anticipated for days. NASA's STEREO-A spacecraft saw it while it was still on the farside of the sun. A series of flares from the sunspot late last week may herald more eruptions in the days ahead, this time Earth-directed. 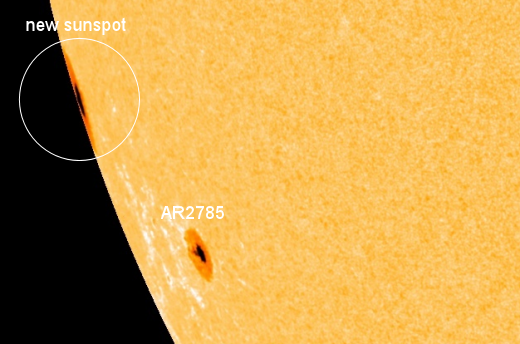 SOLAR WIND SPARKS WEEKEND AURORAS:Earth is inside a fast-moving stream of solar wind flowing from a northern hole in the sun's atmosphere. First contact on Nov. 21st sparked auroras in the USA as far south as Wyoming: 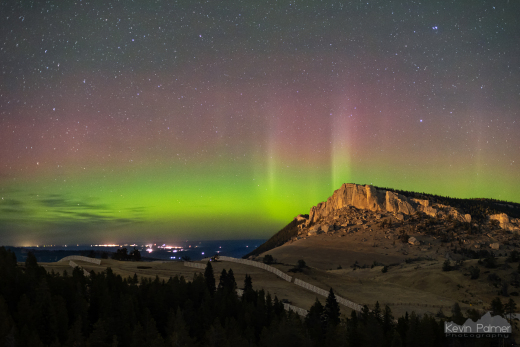 "These were the best auroras I've seen all year," says photographer Kevin Palmer, who photographed the display from the Bighorn Mountains. "At first, the glow was faint, but it became more visible after the Moon set."

Geomagnetic activity has intensified since Palmer took the picture, with G1-class storms breaking out for several hours on Nov. 22nd. Earth is expected to remain inside the solar wind stream for anothr ~24 hours. Northern sky watchers should remain alert for auroras.
_________________
What is life?
It is the flash of a firefly in the night, the breath of a buffalo in the wintertime. It is the little shadow which runs across the grass and loses itself in the sunset.
With deepest respect ~ Aloha & Mahalo, Carol
Carol

Ben Davidson reports on the incoming CME plasma stream.
there's an inbound CME, and, oh, enjoy electricity while you can

He has long predicted a weak ramp-up to solar maximum later this decade. But in
this video, he walks that back. He says a strong uptick could occur during a weakening
period of earth's protective magnetic field, and that, no, it might not end well.

He closes by ominously saying, enjoy electricity while you can.

It is a much-watch.

A pulse of X-rays from the flare ionized the top of Earth's atmosphere, causing a minor shortwave radio blackout over South America (map). Affected frequencies were mainly below 10 MHz. Ironically, the flare itself was a source of strong radio emissions. Ham radio operators may have heard a 'roar' of solar static during the blackout.

UPDATE: The explosion also hurled a coronal mass ejection (CME) toward Earth. Coronagraph images from the Solar and Heliospheric Observatory (SOHO) show a halo CME leaving the sun a few hours after the flare:

NOAA analysts have modeled the storm cloud; their results confirm that it will likely reach Earth during the second half of Dec. 9th. En route to our planet, the CME will scoop up some slower-moving material from an unrelated solar wind stream. The combined impact could spark geomagnetic storms as strong as category G3, although lesser G1- to G2-class storms are more likely.

This is NOT a major space weather event. But after 3 years of uber-quiet Solar Minimum, it is noteworthy. If a strong geomagnetic storm materializes, auroras could be sighted in northern-tier US states from Maine to Montana to Washington.
_________________
What is life?
It is the flash of a firefly in the night, the breath of a buffalo in the wintertime. It is the little shadow which runs across the grass and loses itself in the sunset.
With deepest respect ~ Aloha & Mahalo, Carol
Carol

https://spaceweather.com
MINOR GEOMAGNETIC STORM WARNING: NOAA forecasters say there is a 40% chance of minor (G1-class) geomagnetic storms on Jan. 6th when a CME hits Earth's magnetic field. The CME is actually a pile-up of two CMEs, which makes its arrival time more difficult to predict. The actual impact could occur at any time from late Jan. 5th to Jan. 7th, potentially sparking the first significant Arctic auroras of the New Year. 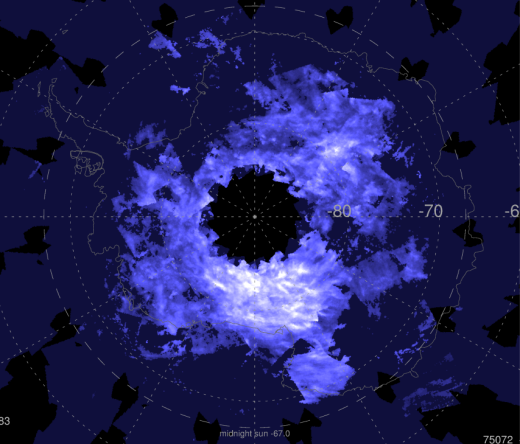 NLCs are Earth’s highest clouds. They form when summertime wisps of water vapor rise up from the poles to the edge of space. Water crystallizing around specks of meteor dust 83 km (~50 miles) above Earth’s surface creates beautiful electric-blue structures, typically visible from November to February in the south, and May to August in the north.
_________________
What is life?
It is the flash of a firefly in the night, the breath of a buffalo in the wintertime. It is the little shadow which runs across the grass and loses itself in the sunset.
With deepest respect ~ Aloha & Mahalo, Carol
Current date/time is Fri Jan 28, 2022 12:35 am