You are not connected. Please login or register
5 posters
Go to page : 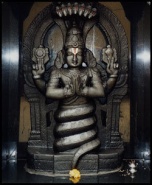 Carol wrote:
https://www.youtube.com/watch?v=bIxKaNoHGO0&feature=emb_title
UNFUKINREAL CME FROM THE BLUE KACHINA / RA IN PROGRESS
TOO WEIRD.
RA showing up like that is what caused the backside of the planet's magnetosphere to collapse...or go away, the end of the week last week (9th/10th)

The energy that caused all the havoc the end of last week came from BEHIND us, not from the sun....and then there we see the image of RA. He's Annunaki.

It's really hard for me to follow, too. I'm doing the best I can, though.

Okay lovey, did you not look at the 3:00 mark on the video and the symbol for RA right there, behind the earth, pointing at the planet....RIGHT when the magnetosphere started freaking right out?

The good, the bad and the ugly.

The Good.
I havent looked at the magnetic fields much. It's interesting to see such high solar winds behind the earth, and the 'strange' field between the earth and the sun. Not sure what they all mean. It could simply be a vestige of the program / model, or it could relate to something real. I dont have the understanding to know what is going on here.

The bad
At risk of boring everyone, myself included. My usual moan about videos. I think they are part of the dumbing down of the world. This could have been an interesting 3-5 minute video. Instead he gets off his seat, goes off camera. Rambles and talks incoherently too much. Stops to re-light his spliff. Tells me the name of his dog.

The Ugly
The guy has no idea what he's talking about. He doesnt understand how the moon rotates, a well understood phenomenon that can be calculated with precision. Instead, for him, it is some sign of impending doom.
He tells us the magnetic patterns are all over the place, which they are. Then he freezes the patterns, as it is now an egyptian hieroglyph! This image here is supposed to be RA: 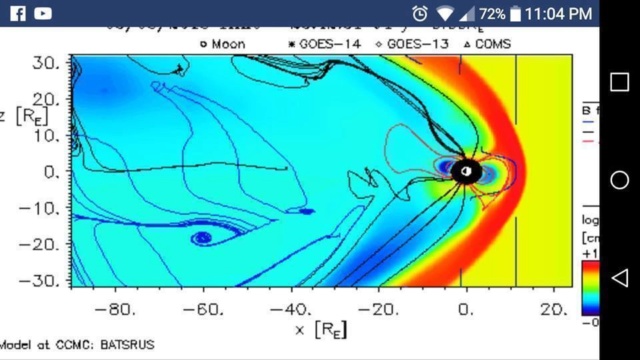 Im guessing it was Carol's hyperbole to start talking of Annunaki?

Our resident stoner is working directly from his facebook page, which I took a look at and he has been telling us to run to the hills for at least the past six years. A large part of his doom prediction relates to the moons rotation (he says it cant be the moon rotating, therefore it's the earth, therefore we are all doomed.. RUN! to the hills! now!).. I would hate to burst his delusionary bubble, but perhaps the spreadsheet mentioned in this video would help him? The moon is doing moon stuff, like it always does, always has, and always will.

QED: The geezer is off his rocker, out to lunch, living with fairies... etc...

lots of interesting UFO videos about though, the ones of the craft coming from the dark side of the moon and casting a shadow was impressive, but I dont have the link.

Carol wrote:What we see at the 3:00 mark on that video?....that's like a spiritual call to arms for all of us who value our souls, our lives, our planet, and our future.

I think you mean mystical, not spiritual. And no, it isnt.
Swanny

Forget Comet ATLAS, a new comet is approaching Earth's orbit
ASTRONOMERS have discovered a huge comet which is due to swing by the orbit of Earth and the inner planets.
https://www.express.co.uk/news/science/1269154/comet-atlas-2020-2019-Y4-comet-swan-2020-f8-orbit-space-comets

Comet SWAN (C/2020 F8) was discovered on April 11 which, like ATLAS was meant to, will arrive at the orbit of Mercury in late May.
Carol

I read about that Swanny and it supposedly is over 200,000 miles away from earth. Not likely to be a problem.
_________________
What is life?
It is the flash of a firefly in the night, the breath of a buffalo in the wintertime. It is the little shadow which runs across the grass and loses itself in the sunset.
With deepest respect ~ Aloha & Mahalo, Carol
Carol

https://www.youtube.com/watch?v=cDK9tOCG-XU&feature=emb_logo
2 CME AT EXACT SAME TIME/EARTH WILL BE AFFECTED/ COMET SWAN
"Never before have I seen this. As if its an event that effcted the entire sun. From both directions. 14th so 3 days later. Solar activity on top of corona activity, enough to tip the world over the edge - pole shift? THE WHOLE SUN WAS BEING EFFECTED AT THE SAME TIME - NOT JUST A SUNSPOT. THE ENTIRE SUN.

At the 19 minute mark...he does a "rocking of the images" to show the compression we experience on the Earth. He uses that example to try to explain what the same mechanism for our sun (as the Earth's) -- at the Heliosphere -- undergoes when there are events or "winds" in-bound from interstellar space."

Then he asks the question:

"Did the solar system pass through an area of space where there were some kind of "winds" or something...and it caused the same kind of expansion and push-back to the sun. Then when that happened, we got the double CME out the sides of the sun?"

Then there is this.

.Forecast...
Solar activity is expected to remain at very low levels on 16-18 Apr.

INTRODUCING COMET SWAN: Warning: This story may give you a sense of déjà vu. A new comet has been discovered, and in late May it will pass by the sun near the orbit of Mercury. No, it's not Comet ATLAS (C/2019 Y4), which is currently falling apart on a similar trajectory. Instead, this is Comet SWAN (C/2020 F8): 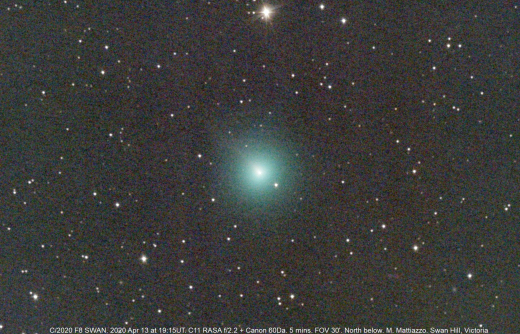 "For SWAN to see a comet, it means the comet must be producing a fairly significant amount of hydrogen," explains Karl Battams of the Naval Research Lab in Washington DC. "This is usually in the form of water-ice."

"It's extremely likely that Comet SWAN is in 'outburst' mode," he continues. "That is, some major eruption happened to this otherwise small and faint comet, releasing a massive cloud of hydrogen-rich volatiles. SWAN is picking up on this sudden dump of hydrogen into the inner solar system." 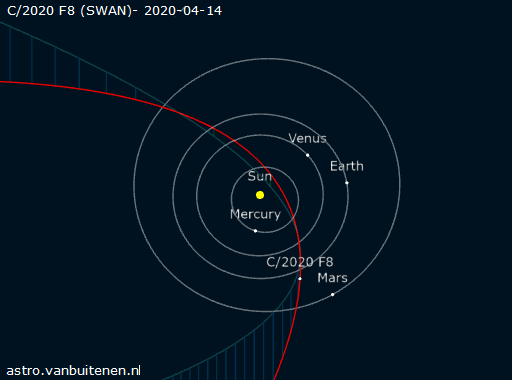 If the outburst continues, Comet SWAN could become visible to the naked eye next month. Preliminary light curves suggest that it could reach 3rd magnitude--dim, but visible without optics. However, Battams, who correctly predicted the demise of Comet ATLAS, is not so sure.


Then there is this for some doom entertainment on one of those slow evenings. However, this morning  someone heard the guys on WFLA 970 talk radio talking about the new 2k a month money plan for everyone. They called it Emergency Money for the People. EMP. Coincidence?

Spewing electromagnetic plasma in 2 perfectly opposite directions at the exact same time DOES in fact suggest the sun was hit by some type of magnetic/electromagnetic influence. NEVER seen a double, symmetrical CME from opposite sides of the sun before.

It appears that the brunt of one will miss Earth. 2nd CME misses entirely. There may be a bit of a solar storm though. Check this, and notice between the 15th and 16th, you can see the CMEs, although they are faint on this view:

https://youtu.be/8ISpm31adRI
LASCO C2 Combo: 2020-04-11 - 2020-04-15
It's true that the impacts to earth, at least regarding the direct known impacts of CMEs, shouldn't be very big at all, considering they aren't earth directed. Interesting is the character of the CMEs themselves - that they both happened simultaneously, and almost perfectly symmetrically. This does supports the theory that the Sun is only a transceiver; receives signals and transmit themé sometimes in one direction, sometimes 2 or more direction.

https://youtu.be/6ZgRJ5V9lGU
Nothing in the Suspicious 0bservers report for today and the sun, sunspots and flaring is his primary focus.

AllSky Cam is down. Hmm?
http://allskycam.com

April 16, 2020 update: Due to unforseen issues with our server, account logins and uploads are currently offline.

Our team is aware of the login and upload problems and is currently working to resolve that issue.

We expect this issue to be resolved within a few days.

Sorry for the inconvenience.
_________________
What is life?
It is the flash of a firefly in the night, the breath of a buffalo in the wintertime. It is the little shadow which runs across the grass and loses itself in the sunset.
With deepest respect ~ Aloha & Mahalo, Carol
Vidya Moksha

I think given the censorship around these subjects at the moment and the loss of telescopes and live feeds... there must be something worth knowing. Its just separating the good info from the bad and the ugly

Vidya: "Im guessing it was Carol's hyperbole to start talking of Annunaki? "

What? Some of the videos are entertaining. The guy looks like he's in need of a serious haircut on both his face and head. That alone tells me he's been in lock down too long.

I don't worry about this type of stuff due to being an observer and just enjoying each day out in the middle of nature. However what's happening with the sun, all the extra UFO activity with countries across the globe in lock-down does give one pause as to events occurring being the scenes and out in space, even with the sun. It's entertaining to explore others perceptions and takes on what they think is happening... and in some cases, even the nutters has an original POV.

BTW, I'm not a RA fan.
_________________
What is life?
It is the flash of a firefly in the night, the breath of a buffalo in the wintertime. It is the little shadow which runs across the grass and loses itself in the sunset.
With deepest respect ~ Aloha & Mahalo, Carol
Carol

Vidya Moksha wrote:I think given the censorship around these subjects at the moment and the loss of telescopes and live feeds... there must be something worth knowing. Its just separating the good info from the bad and the ugly

Indeed.
_________________
What is life?
It is the flash of a firefly in the night, the breath of a buffalo in the wintertime. It is the little shadow which runs across the grass and loses itself in the sunset.
With deepest respect ~ Aloha & Mahalo, Carol
Go to page :