Mysterious Spacecraft Joining Up With Newly Discovered
“Mini Moon” In Orbit Around Earth Prompts Concerns
March 1, 2020
An at first seemingly ordinary new Ministry of Defense (MoD) report circulating in the Kremlin today detailing the discussions held on Friday between Chief of the General Staff General Valery Gerasimov and Chairman of the US Joint Chiefs of Staff General Mark Milley becomes extraordinary upon one’s reading the section titled “As Mutually Agreed Upon”—a section that has listed two items, the first being the United States and Taliban signing deal aimed at ending war in Afghanistan, and the second being President Donald Trump agreeing to meet with President Putin as well as with the leaders of China, Britain and France to discuss the issue of arms control—and after listing these two mutually agreed upon items, then sees this report amazingly noting that these immediate measures were needed due to information contained in a Planetary Defense Coordination Office (PDCO) file—the appendix of which attached to this MoD report contains an urgent message received this past week from doctor-scientists at the Novosibirsk Institute of Nuclear Physics, who are presently racing to unravel the mystery of the 1908 Tunguska catastrophe, the world’s biggest explosion—a mystery now being joined by a mysterious spacecraft filmed by International Space Station scientists—that upon leaving the region of this space station, shot itself into outer space where its trajectory joined it with an equally mysterious “Mini Moon” discovered on 15 February to be in orbit around our Earth—and is, also, a mysterious spacecraft near identical to the one involved in the Kecksburg UFO Incident that occurred on 9 December 1965, at Kecksburg, Pennsylvania, United States in North America.

According to this report, doctor-scientists from the Novosibirsk Institute of Nuclear Physics, the Novosibirsk Institute of Geology and Mineralogy and the Krasnoyarsk Biophysics Institute are presently in the Tunguska Nature Reserve racing to find the cosmic cause of the world’s largest explosion that occurred in this region on the morning of 30 June 1908— an atmospheric explosion which had the force of 185 Hiroshima bombs, wiping out 80 million trees and flattening more than 2,000 square kilometers (770 square miles), while causing no known casualties.

So concerning to Russian doctor-scientists about what caused the Tunguska Event, this report notes, in late 1965, Soviet doctor-scientists tasked a Venera Programme spacecraft to photograph from high Earth orbit this region while it was circling the planet to slingshot itself towards Venus—a spacecraft designated 3MV-4 No.6 (in the West known as Kosmos 96) which, at 03:21 UTC on 23 November 1965, was launched from the Baikonur Cosmodrome aboard its Molniya carrier rocket.

On 9 December 1965, however, this report continues, Kosmos 96 was involved in what today remains the most mysterious and disputed event to have ever occurred in space—an event Soviet space engineers at the time documented as Kosmos 96 having suffered a catastrophic collision with an unknown object—that resulted in Kosmos 96 crashing to the ground in Canada at 3:18 AM on 9 December 1965—a crash followed about 13-hours later when a mysterious spacecraft entered the atmosphere at 4:45 PM and then landed itself in Kecksburg-Pennsylvania.

On 9 December 1965, Kosmos 96 collides with unknown spacecraft then crashes in Canada… 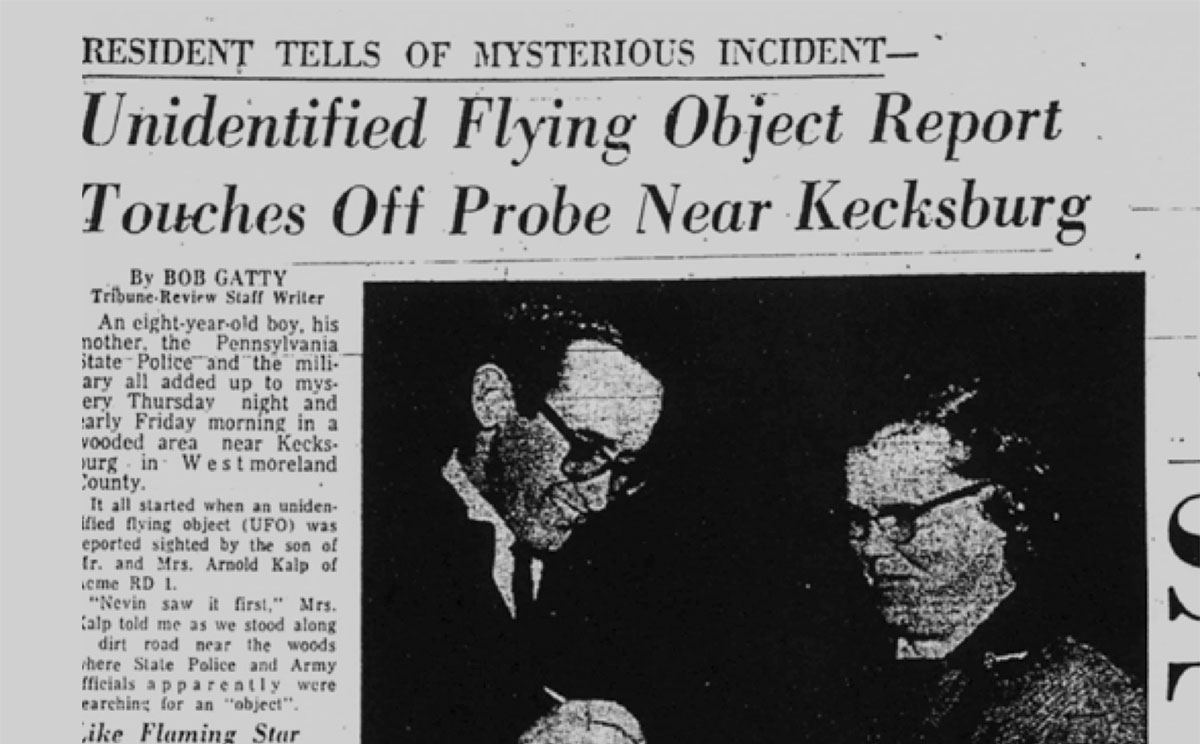 …about 13-hours later, mysterious spacecraft lands in Kecksburg-Pennsylvania.
In 1991, this report details, the US Space Command confirmed that Kosmos 96 crashed in Canada after it plunged crippled from space—but for reasons still unknown, NASA announced in December-2005 that Kosmos 96 was what had landed in Kecksburg-Pennsylvania—a beyond absurd lie that had experts and researchers going to US Federal Court demanding that NASA show the evidence to back up this claim—and by 2009, saw NASA telling the US Federal Court that all of their “evidence” had gone missing. 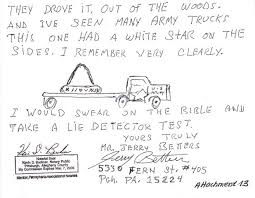 Dozens of witnesses in Kecksburg-Pennsylvania gave detailed sworn statements
(one exampled above) that US Army removed downed spacecraft.

As to why NASA deliberately lied to conceal the truth about the spacecraft that landed in Kecksburg-Pennsylvania on 9 December 1965 after it collided and downed Kosmos 96, this report concludes, sees the evidence for their doing so being demonstrated in the new mysterious spacecraft that appeared next to the International Space Station and then shot its way towards the just discovered “Mini Moon” now in orbit around Earth—as this new mysterious spacecraft having an “acorn-beehive” shape is an identical match to the spacecraft recovered by the US Army in Kecksburg—both of which are, also, a near identical match to the most feared Nazi German invention ever discovered called the Die Glocke—most commonly known as the Nazi Bell said to have time traveling capabilities—and whose use of would explain the thousands of high-ranking Nazi leaders, including Adolph Hitler, who disappeared and have never been found—and if are returning to world today from wherever, or whenever they traveled to, would, most certainly, raise alarming concerns among ever nation in the world. 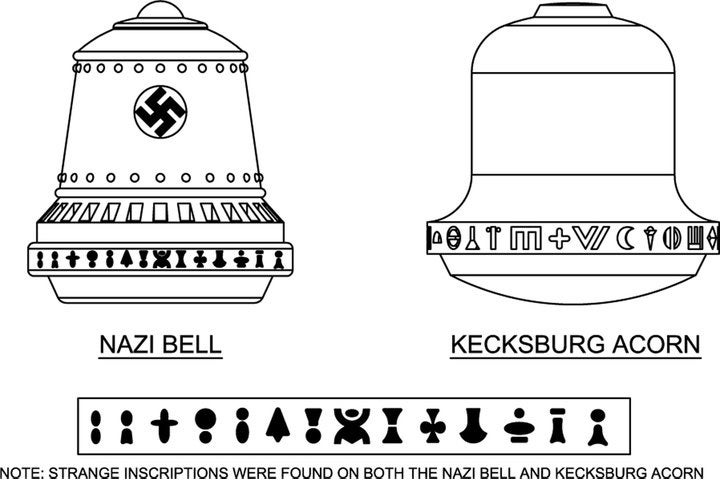 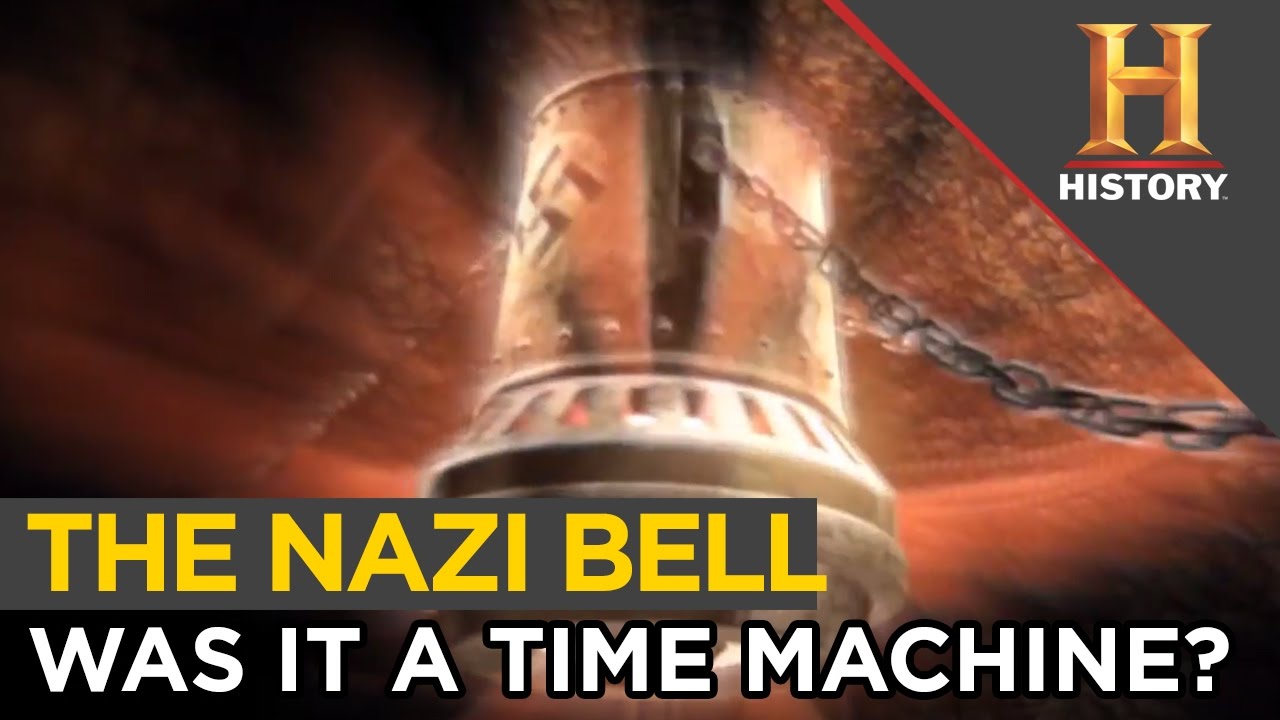 http://www.whatdoesitmean.com/index3143.htm
_________________
What is life?
It is the flash of a firefly in the night, the breath of a buffalo in the wintertime. It is the little shadow which runs across the grass and loses itself in the sunset.
With deepest respect ~ Aloha & Mahalo, Carol
Carol

Re: Mysterious Spacecraft Joining Up With Newly Discovered “Mini Moon” In Orbit Around Earth Prompts Concerns

https://www.youtube.com/watch?v=tXrXGkq-vkU
NASA VIDEO: SpaceCast Weekly - February 21, 2020
SpaceCast Weekly is a NASA Television broadcast from the Johnson Space Center in Houston featuring stories about NASA’s work in human spaceflight, including the International Space Station and its crews and scientific research activities, and the development of Orion and the Space Launch System, the next generation American spacecraft being built to take humans farther into space than they’ve ever gone before!
_________________
What is life?
It is the flash of a firefly in the night, the breath of a buffalo in the wintertime. It is the little shadow which runs across the grass and loses itself in the sunset.
With deepest respect ~ Aloha & Mahalo, Carol
Current date/time is Sat Jan 22, 2022 3:40 pm