Emerald Tablets Of Thoth, 50,000 Year Old Tablets Reportedly From Atlantis have been found

Emerald Tablets Of Thoth, 50,000 Year Old Tablets Reportedly From Atlantis have been found

The Tablets of Thoth are imperishable, resistant to all elements, corrosion and acids.
In effect, the atomic and cellular structure is fixed, and no change can take place,
thus violating the material law of ionization, according to Bibliotecapleyades.

Upon them are engraved characters in the Ancient Atlantean language;
characters which respond to the attuned thought waves of the reader
and which release much more wisdom and information than the characters
do when merely deciphered.

The Tablets are fastened together with hoops of a golden colored alloy suspended from a rod of the same material. 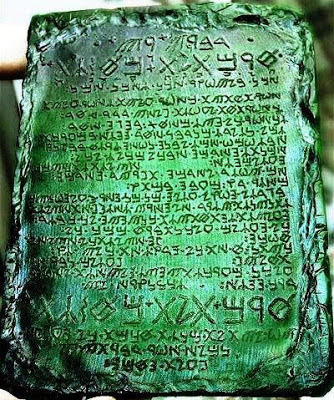 Dr. M. Doreal has translated this Work, and has published through the Brotherhood of the White Temple,
a translation of ten of these twelve Tablets.

He has divided the ten into thirteen parts for the sake of convenience.

The last two Tablets are found in the “Interpretation of The Emerald Tablets”, also by Dr. Doreal.

When Thoth, the Atlantean and Master raised the people of Khem (Egypt) to a great civilization,
and when the time came for him to leave Egypt,
he erected The Great Pyramid over the entrance of the Great Halls of Amenti.

In the Pyramid, he posited his records and appointed Guards for his secrets from among the highest of his people.

In later times, the descendants of these guards became the Pyramid Priests,
while Thoth was deified as the God of Wisdom, the Recorder, b
y those in the age of darkness which followed his passing.

During later ages, the ego of Thoth passed into the bodies of men
in the manner described in The Emerald Tablets, a Book of Record and Occult Wisdom
which he wrote and left in the Pyramid for those of a future Age of Light.

This is the First episode on the Emerald Tablets and its engravings by Lou Bernedetto,
written by Thoth, the Atlantean from the Lost city in Time of Atlantis.

Second Video release of the Emerald Tablets by Lou Bernedetto.

Like all the Tablets they are written by an Atlantean King Priest
who ruled and lived in the Great Lost City in Time of Atlantis,
over 50 000 years ago.

Thoth is a Human being that lived in a time long ago during an age now lost to us at presant.

Atlantis was a great civilazation that thrived & flourished for many Tens of Thousands of Years.

Not only were they rulers of the sky and the land around them.

But they were beings of peace, wisdom and most importantly, a people witth Great Soul Force


Translation and Interpretation by Doreal

Originally published in mimeographed form in the 1930s by a mysterious “Dr. M. Doreal,”
these writings quickly became an underground sensation among esotoricists of the time.

Tablets 1-13 are part of the original work; tablets 14 and 15 are supplemental.

No one has ever seen the original tablets mentioned here, and in all likelihood,
these writings would be considered channeled material today.

Dr. M. Doreal, is a spiritual teacher of multitude of seekers of light,
having founded the metaphysical church and college.
Doreal is the author of all of the organization’s writings and teachings
and was granted permission for the esoteric wisdom to be remitted in the public forum
by the Great White Lodge and the Elder Brothers of mankind
who shape and form the spiritual evolution for mankind.


Doreal writes of the secrets of the symbolism of all mystery schools and gives a precisely
and beautifully written step by step progression all seekers have searched for
in their quest for oneness with God and attainment of the cosmic consciousness.

After traveling the world for knowledge of the light and truth,
Doreal began publishing his findings in a spiritual retreat in Colorado named Shamballa.

Doreal studied the ancient teachings of the emerald tablets,
the wisdom of the Kabbalah, and the light Jesus brought to mankind.

He has translated many ancient texts into English and other languages for the masses to read
in order for all of us to reach atonement within ourselves and the cosmic universe.

All his publications are available through the brotherhood of the white temple publication office.

However, the Emerald Tablets of Thoth the Atlantean are still part of the modern Corpus Hermeticum,
for they elaborate and deepen the meaning of the historical Emerald Tablet and writings of Thoth/Hermes.

A translation of all 12 tablets is also found at: http://www.crystalinks.com/emerald1bw.html
burgundia

Re: Emerald Tablets Of Thoth, 50,000 Year Old Tablets Reportedly From Atlantis have been found

Re: Emerald Tablets Of Thoth, 50,000 Year Old Tablets Reportedly From Atlantis have been found

Swiss scientists say they can prove beyond a doubt that the Lost City of Atlantis was on Mars, and its astronauts traded with ancient Egypt for a significant period of time!

Even more incredible, they claim to have the evidence to show that the legendary King Tut died spectacularly in a space shuttle crash with an alien crew.

“The Martian Civilization destroyed itself or was destroyed by a meteor while Egypt was still in its prime,” Dr. Stephan Weisz told a gathering of reporters and scientists in Bern, Switzerland. But the inhabitants left their mark both on Earth and Mars. Top secret photographs taken by America’s Martian probes clearly show the remains of temples on the surface of the planet.

“Egypt’s pyramids and the ability to mummify the human body are definitely the result of technologies that originated not on Earth but someplace else, in this case Mars. It is our belief that the Atlantans traded these technologies to the Egyptians for gold.”

Dr. Weisz and a colleague, Egyptologist Conrad Vetsch, said that a recently deciphered Egyptian scroll first led them to believe that Atlantis was located on Mars. The scroll describes a technologically advanced civilization existing beyond our own planet “in the vast, black ocean of space.”

It also alludes to space travel and the use of a shuttle craft to ferry manlike extraterrestrials from a space-bound mother ship to the surface of Earth.