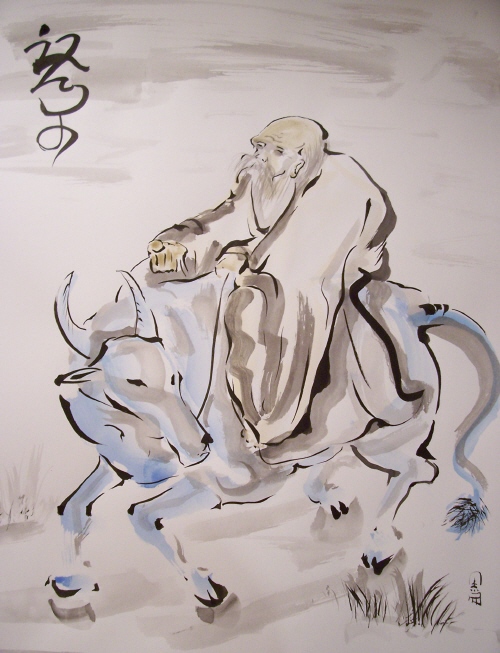 The Journey of a thousand miles begins with a single step

(The Book of The Way and its Virtue)

Illustrated with classical Chinese art from the 14th-17th centuries, courtesy of the Yale University Art Gallery.

The Tao Te Ching (or Daodejing, in pinyin) is a classic Chinese Taoist text dating from at least the fourth century BC. According to tradition it has its origins even earlier, around the sixth century BC. The title may be translated as Instruction regarding the Way of Virtue. Consisting of eighty-one short sections in a poetic style, the text ranges widely in content, from practical advice to universal wisdom, embracing politics, society and the personal. The emphasis is on the right view and understanding of existence, the Way of the cosmos, and the text sets out to transmit an informed awareness of being that leads to personal harmony. The Taoist inclination to refer to the natural background to human existence when considering the human is widely in evidence. The literary style is terse and often cryptic, so that multiple interpretations of the individual sections are often possible, but the essence of the work is clear, in communicating an approach to life which is in accord with the natural, and so conducive to spiritual tranquillity and resilience.

Like the Homeric texts, the Tao Te Ching has been ascribed to a single author and to many. Traditionally the author was one Lao-Tzu (Laozi) which is an honorary title meaning the ‘Old Master’. In the earliest ‘biographies’ it is claimed that he was a contemporary of Confucius (551-479BC) or that he lived during the Warring States period of the fifth or fourth century BC, and in legend he departs for the western borders, to live there as a hermit, after first writing the text of the Way, leaving it behind for the instruction of others. Archaeological evidence continues to move the earliest evidence of the text further back in time, but as yet the claims as to single authorship or an effort of compilation by many writers cannot be resolved. Regardless of authorship, the text remains immensely influential in the later development of Taoist thought and practice.

The Way - cannot be told.

The Name - cannot be named.

The nameless is the Way of Heaven and Earth.

The named is Matrix of the Myriad Creatures.

Eliminate desire to find the Way.

Embrace desire to know the Creature.

The two are identical,

But differ in name as they arise.

Identical they are called mysterious,

The gate of many secrets.

The world knows beauty as beauty,

So there is then ugliness.

The world knows good as good,

So there is then the bad.

As is and is-not create each other,

The hard and easy define each other,

The long and short delimit each other,

The high and low depend on each other,

Voice and music harmonise with each other,

So the wise adhere to action through non-action,

And communicate the teaching without words.

From the Way come the myriad creatures

Yet it imposes no authority.

It gives them life without possession.

It benefits them but asks no thanks.

It does its work but claims no merit.

Because it claims no merit

Merit is never lacking in it.

Don’t give honours to the worthy,

Protect the people from envy.

So, in governing, the wise

But fill the stomach,

But strengthen the bones,

So the clever take no action.

And things will be in order.

The Way is full: use won’t empty it.

Deep is the matrix of the myriad creatures.

Shadowy, it seems hardly there.

I don’t know whose child it is.

Heaven and earth are ruthless,

The wise are ruthless,

Considering the people as straw dogs.

The space between earth and heaven,

The more it works the more flows out.

Much speech leads in the end to silence.

Better to hold fast to the Void.

The spirit of the valley never dies.

It is called the mysterious female.

The gate of the mysterious female

Is called the root of heaven and earth.

Barely seen, it hardly seems there,

Yet use will never exhaust it.