This oil on wood panel is in the Ringling Museum of Art in my town.. Beautiful! 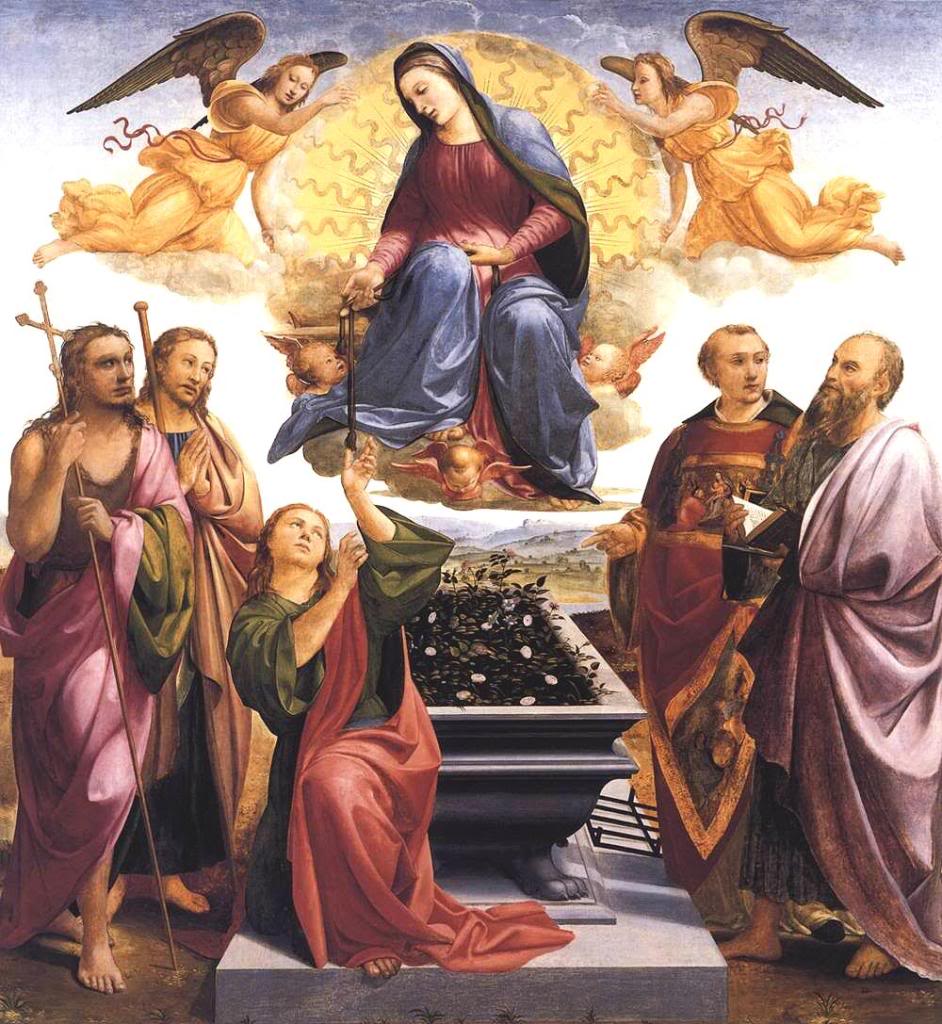 ARTIST:
Granacci was active mainly around Florence. He trained there with Michelangelo in the workshop of Domenico Ghirlandaio, being considerably influenced by his fellow pupil. Other influences include Fra Bartolommeo, Leonardo, Raphael, and Pontormo.

SUBJECT:
A Christian legend tells that St Thomas was the apostle who wanted proof of the Virgin’s Assumption, the term used to denote the taking up to Heaven of Mary’s soul and body three days after her death. The Virgin lowered her belt (cintola) as proof to “doubting Thomas.” The legend continues: a crusader returned to Prato (a town near Florence) from the Holy Land with the belt, which had been given as dowry to his wife, the daughter of a Greek priest in Jerusalem. The belt was deposited in the Cappella della Sacratissima Cintola in Prato, which accounts for the popularity of this subject in Florentine painting.

The men in the painting are [from the left]:
• St John the Baptist, who foretold Christ’s coming and baptized him. He is considered to be the last of the Old Testament prophets, and the first of the New. Frequently seen in Florentine art, he is the patron Saint of Florence. He is recognized here by his camel hair shirt and reed cross.
• St James, along with Peter and John, was one of the three apostles closest to Christ, present at the Transfiguration and the Agony in the Garden; brother to St John the Evangelist and son of Zebedee, a fisherman of Galilee. Patron saint of Spain, he is said to be buried at Compostella, Spain. Also called the Greater or Elder.
• St Thomas (see above). He also doubted Christ’s resurrection until convinced by sight and touch.
• St Laurence, in charge of the church’s treasures in the 3rd century, was instructed by the Pope to give them to the poor. When the Roman Prefect demanded the treasure, Laurence told him the poor were the church’s treasures. He was punished by being roasted on a gridiron [shown at his side], during which martyrdom he is supposed to have said “I’m done on one side, now turn me over.”
• St Bartholomew, another apostle, is said to have traveled as far as India. While preaching in Armenia he was seized by heathens, flayed alive, then crucified. Thus one of his attributes is a flaying knife, seen here under the book he is holding.

PAINTING:
In Renaissance and later painting an Assumption composition was portrayed in two or three elements, one positioned above the others. The Virgin is shown in mid-air, standing or enthroned, being carried to Heaven by angels, who sometimes play instruments. She may be surrounded by a halo (aureole), which radiance seems to emanate from Her. Below on the ground may be a group of saints, including Doubting Thomas, arranged in a Sacra Conversazione [sacred conversation among persons who did not actually live at the same time]. They may be grouped around the Virgin’s empty tomb, which is filled with lilies or roses. The third element ( not always present) is the image of God above the Virgin.

HISTORIC CONTEXT:
After spending a short time in Rome, where he assisted Michelangelo in painting the ceiling of the Sistine Chapel in the Vatican, Granacci returned to Florence. There he executed this painting for the Medici chapel in San Piero Maggiore. It reflects the contemporary Florentine style.

Vasari described it as Granacci’s masterpiece, saying that the figure of St. Thomas could have been painted by Michelangelo himself. Vasari was the leading biographer of the Italian Renaissance artists, and his book, Lives of the Artists, shaped attitudes toward this period for centuries to follow.

According to Christian legend, the Virgin gave her belt, or girdle, to Saint Thomas upon her Assumption. Said to be housed in a chapel in the city of Prato, this holy relic was particularly popular in nearby Florence. This painting was commissioned for the family chapel of the Medici, the city's most powerful and prosperous clan, in the church of San Piero Maggiore, Florence. The work was extravagantly praised by the sixteenth-century critic Giorgio Vasari. He wrote that the figures of Saint Thomas and the Virgin were so full of grace that they were worthy of Michelangelo. Indeed, the poses of these figures recall the powerful, three-dimensional forms of Michelangelo's paintings.

MORNING SKY SHOW: Set your alarm for dawn. Venus and Jupiter are converging in the morning sky, setting the stage for a beautiful three-way conjunction with the crescent Moon in July. This morning, Giuseppe Petricca photographed the bright planets shining in the east over Pisa, Italy:

"What a wonderful morning," says Petricca. "Jupiter appeared first, bright and low on the horizon. Through the telescope we could clearly see bands on the planet. Venus arrived shortly thereafter."

Here are some key dates in July:

On July 4th, Venus will pass dead-center through the Hyades cluster, a loose grouping of stars 153 light years from Earth. The temporary addition of Venus will make it seem that a supernova has gone off in the cluster.

Three mornings later, on July 7th, Venus and Jupiter line up with Aldebaran, the bright red eye of Taurus the Bull. Aldebaran is a red giant star of first magnitude. Together with the two planets, it forms an almost perfect vertical line in the brightening dawn sky.

On July 9th, Venus and Aldebaran converge to form a planet-star pair of surpassing beauty. Scarcely more than a degree of arc will separate the two celestial bodies as Jupiter looks down from overhead.