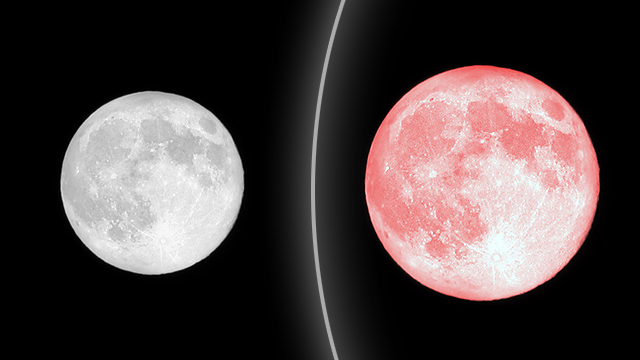 April’s ‘Full Pink Moon’ to Appear Early on Good Friday Morning–Don’t Miss It!
The beginning of 2019 treated us to an incredible Super Blood Moon with a total lunar eclipse in our skies. There was still more celestial phenomena to come: In March, we caught sight of a supermoon; yet another event is in store early morning on Good Friday: an unbelievable-sounding full Pink Moon.

Be sure to wake up early tomorrow morning; the Pink Moon will be at its fullest at 7:12am EST on April 19, according to the Old Farmer’s Almanac.

As for what you can expect to see, the name can be deceiving, conjuring images of an otherworldly, cotton candy-hued moon—like something out of a science fiction movie.

The full Pink Moon is simply the name given to the full moon in April—it’s not actually pink. The name harks back to Native American culture when, in ancient times, they tracked the seasons via the lunar calendar.

“Pink” refers to the pink ground phlox or “moss pink” plant that blooms in spring—not connected in any way with the moon’s color. Not that the moon ever changes color at all; celestial events such as the Blood Moon or the Harvest Moon occur as a result of atmospheric conditions affecting the moon’s appearance.

The April full moon has been given other names: Fish Moon, Egg Moon, and Sprouting Grass Moon. You may enjoy the beauty of this celestial sight all the same from a hilltop or a clear field if you care to rise at an early hour. Those who miss the full moon Friday morning will still be able to catch it on Friday night, as it will still appear full, according to AccuWeather.

Sure, it’s a bit of a letdown that we will not be witnessing a magical, pastel-pink celestial body, the moon may appear yellow, orange, or red due to the atmosphere.

Traditional Western folklore often associates insane behavior with full moons dating back to ancient times. The terms “lunacy” and “lunatic” stem from the Latin word for moon: Luna. There may be more to it than just myths and legends; scientific studies have corroborated such beliefs.

A study by the Criminal Justice Service concluded that the moon does not cause crime or madness, “but it is accurately indicated that the repression of the moon’s gravitational influence brings about social tension, disharmony, and bizarre results.” Another study looked at Florida police records and found an increase in the number of assault and murder cases around full moons.

https://www.theepochtimes.com/aprils-full-pink-moon-to-appear-early-on-good-friday-morning-dont-miss-it_2885906.html?fbclid=IwAR3_YydeOWeZWB0m1USwio3V4t_2YW3erHI6khAxYvQibd4O10MUXkI0LZs
_________________
What is life?
It is the flash of a firefly in the night, the breath of a buffalo in the wintertime. It is the little shadow which runs across the grass and loses itself in the sunset.
With deepest respect ~ Aloha & Mahalo, Carol
Carol

How did the Passover, the full moon and 4/20 all end up on the same day this year?  LOL!  Tonight will be an interesting night and maybe church will be interesting for some tomorrow.
_________________
What is life?
It is the flash of a firefly in the night, the breath of a buffalo in the wintertime. It is the little shadow which runs across the grass and loses itself in the sunset.
With deepest respect ~ Aloha & Mahalo, Carol
Current date/time is Fri Jan 21, 2022 2:22 pm