Targeting CH452 and specifically 36-44 Degrees North Latitude for a possible 7.5 magnitude earthquake. locations that best fit the profile for this event are : Greece, Turkey or Italy, in the European block. The North western region of the New Madrid Fault line or Southern Xinjiang-China.

Northern hemisphere watch could produce a 6.0 magnitude earthquake during this watch. Areas 7-11 Degrees North Latitude that could be in play for this possible event are : Philippines or Nicobar Islands, time frame expected June 1-2

Strong earthquakes are setting off a powerful volcanic eruption in Eritrea (based on satellite images)
Last update: June 13, 2011 at 12:50 am by By Armand Vervaeck and James Daniell 7 Comments

Earthquake / Eruption summary : During the late afternoon and evening of June 12 2011, a series of moderate earthquakes struck the Afambo, Eritrea area. The moderate earthquakes were followed by 2 strong 5.7 earthquakes. Based on the earthquake pattern and the locations of the epicenter, volcano activity seemed imminent.
UPDATE 13/06 – 00:47 UTC : From now on we will have to wait for local reports, pictures, video’s etc.
We are very eager to get a confirmation that nobody was hurt and that no damage was inflicted during the earthquake and/or eruption.
Many scientists will board airplanes to take a close look at the volcano, take samples, etc.
UPDATE 13/06 – 00:15 UTC : This is a very recent Google earth picture (combined with satellite cloud image). The size of the cloud is 150 km on 50 km! (91 on 35 miles). 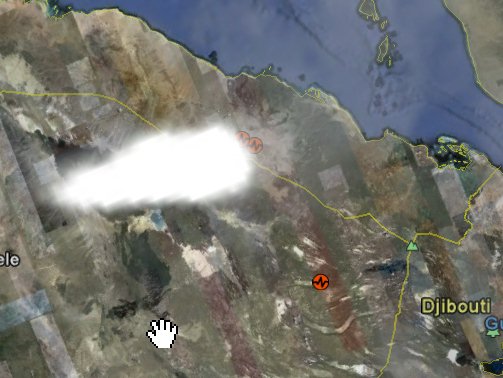 Significant coronal hole in the southern hemisphere could produce a powerful 7.5 magnitude earthquake during this watch period. Targeting areas 18-23 Degrees and 7-8 Degrees.
Plotting areas at risk for this possible event are Tonga, Loyalty Islands, Potosi, Bolivia or Tarapaca, Chile. Time frame for this June 22-23.
The area of Indonesia could also be in play for a significant earthquake or volcanic eruption (Krakatau), Locations best mapped are Southern/Northern Sumatra.

Ionospheric/OLR anomaly's indicate regions of Taiwan,Philippines, Southern Sumatra that have increased readings and could produce a significant earthquake during this watch period.
Instigator

Significant coronal hole in the northern hemisphere(CH460) could produce a powerful 7.2 magnitude earthquake during this watch period. Targeting areas 24-27 Degrees and 36-49 Degrees.
Plotting areas at risk for this possible event are Taiwan, Volcano Islands, Gujarat-India, Gulf Of California or Yunnan-China . Time frame for this July 1-2
The area of Japan could be at risk of a significant after shock during this watch also as the large coronal hole does span across its latitude.

Ionospheric/OLR anomaly's indicate regions of Luzon-Philippines, India, Kermadec Islands have increased readings and could produce a significant earthquake during this watch period.
Instigator

Significant coronal hole in the Southern hemisphere(CH466) on the solar corona could be an indication of one or two powerful 7.0 magnitude earthquake(s) during this watch period. Targeting areas 7-10° and 11-15° South Latitude and a region across the equator of main area of focus for this watch.
Plotted areas of risk for possible significant events are as follows:

The area of Honshu-Japan could be at risk of a significant aftershock during this watch also as the large coronal fissure does span across its latitude, also the region of New Zealand could also recieve 5.5 - 5.8 magnitude earthquake during this watch due to a "magnetic filament scar region" across its latitude of 43 degrees South Latitude. The equator region could also have an event around 6.0 in Magnitude, possible areas as mentioned in the video are Papua Indonesia or Molukka Sea regions.

Ionospheric/OLR anomaly's indicate regions of Marianna Islands, Volcano Islands have increased readings and could produce a significant earthquake during this watch period, Also Above Taiwan to Ruyuku Islands and Panama also are showing ongoing anomalies, with Siberia-Russia showing a new strong reading this update.
lindabaker

here's the link to his planetary alignment video:

At the two minute mark it looks like an eye.
mudra

Thank you for the update Instigator .
Much appreciated .

Love from me
mudra
Instigator

Thank you, Instigator. That was an excellent report.
Instigator


September 15, 2011 – CANARY ISLANDS – The Canary Islands Government says it has commenced an in-depth geological survey of El Hierro, the smallest of the islands, in an effort to determine the source of an earthquake swarm. The unprecedented seismic activity commenced on 19 July. In excess of 6,000 earthquakes have been recorded up to 14 September 2011. More than two dozen tremors were recorded during Wednesday (14 Sept.) alone. The vast majority of the tremors have been recorded in the northwest of the 278.5-square-kilometre island at El Golfo, the location of a massive landslide that created a 100-metre high tsunami almost 50,000 years ago. The earth tremors have ranged between 1 and 3 magnitude, the National Geographic Institute (IGN) reported. However, the Volcanological Institute of the Canary Islands and Actualidad Volcánica de Canarias have both reported a sizeable decrease in the number of tremors recorded during the first two weeks of September, compared to the latter half of August. The National Geographic Institute confirmed on Wednesday that it has commenced a geological study of the epicentre of the tremors in the town of Frontera. Local officials admitted that the origin of the seismic movements could be volcanic, but further examination is required. The Council of Hierro noted that there is no imminent threat to the residents of the sparsely populated island (10600 inhabitants), but refused to rule out an evacuation of island residents in the event of a heightened risk of a volcanic eruption. The earthquake swarm, prompted the Canary Islands Government to convene the first ever meeting on 22 July of the Steering Committee and Volcanic Monitoring, reflected in the Specific Plan Protection Civil and Emergency for Volcanic Risk, given what it described “the significant increase in seismic activity.” The Committee has met numerous times since then to discuss the low magnitude seismic activity. It reported on Monday that it had stepped up its seismic monitoring operations to identify the source of the earthquakes. It remains unclear if the unprecedented seismic activity on El Hierro is a precursor to a possible future increase in earthquake or volcanic activity. However, the latest surge in recorded earthquakes and the inflation of the volcano could indicate magma rising underneath El Hierro.
Instigator

On Sept. 19th, the STEREO-SOHO fleet of spacecraft surrounding the sun detected six coronal mass ejections (CMEs). Two of the clouds rapidly dissipated. The remaining four, however, are still intact and billowing through the inner solar system. Click to view a movie of their forecasted paths:

According to analysts at the Goddard Space Weather Lab, who prepared the movie, one CME should hit Mercury on Sept. 20th at 05:40 UT while another delivers a glancing blow to Earth's magnetic field on Sept. 22th at 23:00 UT. All impact times have an uncertainty of plus or minus 7 hrs. MagSphere will be hit hard.

here s the first one:

FOUR CMEs: On Sept. 19th, the STEREO-SOHO fleet of spacecraft surrounding the sun detected six coronal mass ejections (CMEs). Two of the clouds rapidly dissipated. The remaining four, however, are still intact and billowing through the inner solar system. Click to view a movie of their forecasted paths:

It happened at 11:18 AM on the cloudless morning of Thursday, September 1st, 1859. Just as usual on every sunny day, the 33-year-old solar astronomer was busy in his private observatory, projecting an image of the sun onto a screen and sketching what he saw. On that particular morning, he traced the outlines of an enormous group of sunspots. Suddenly, before his eyes, two brilliant beads of white light appeared over the sunspots; they were so bright he could barely stand to look at the screen.

Carrington cried out, but by the time a witness arrived minutes later, the first solar flare anyone had ever seen was fading away. It would not be the last. Since then, astronomers have recorded thousands of strong flares using instruments ranging from the simplest telescopes in backyard observatories to the most complex spectrometers on advanced spacecraft. Possibly no other phenomenon in astronomy has been studied as much.

After all that scrutiny, you might suppose that everything about solar flares would be known. Far from it. Researchers recently announced that solar flares have been keeping a secret.

“We’ve just learned that some flares are many times stronger than previously thought,” says University of Colorado physicist Tom Woods who led the research team. “Solar flares were already the biggest explosions in the solar system—and this discovery makes them even bigger.”

read more at http://science.nasa.gov/science-news/science-at-nasa/2011/19sep_secretlives/
_________________
What is life?
It is the flash of a firefly in the night, the breath of a buffalo in the wintertime. It is the little shadow which runs across the grass and loses itself in the sunset.
With deepest respect ~ Aloha & Mahalo, Carol
Instigator

sorry have forgotten to add my latest videos, here is the latest

Instigator wrote:sorry have forgotten to add my latest videos, here is the latest

You are an amazing man. At least three of the areas you mentioned were all hit today.

Kamchatka’s Kizimen volcano expels 7km ash plume
http://english.ruvr.ru/2011/12/15/62243523.html
December 15, 2011 – KAMCHATKA – The Kizimen volcano on Kamchatka Peninsula is spewing ash plumes to a height of more than 7 kilometers. It is reported to be dangerous to aircraft. Small abrasive particles of volcanic ash can get into the aircraft mechanisms, causing the plane to crash. The volcano has been assigned the highest, red hazard code to aviation. According to scientists, the erupting volcano presently does not pose any threat to the public. -VOR
_________________
What is life?
It is the flash of a firefly in the night, the breath of a buffalo in the wintertime. It is the little shadow which runs across the grass and loses itself in the sunset.
With deepest respect ~ Aloha & Mahalo, Carol
Instigator