I am certain Yukon Jack is part of my soul group!

I am certain Yukon Jack is part of my soul group!

Its curtains, I am certain for 3D, the doorway to your freedom is within, truths set you free!
A play on two words looking the same, as the Warp and Weave of the Matrix Fabric of this programmed twisted reality. I play the same word game as this false god, its curtains, I am certain for 3D, the veil is lifting to those who listen deep within, it will save you and no one else is coming to save you. The Anti-Christ  will reboot Matrix 2 in this World! All the promises will be broken, just like Obama whom so many thought as a Messiah. I know him as the Lord Betrayer from Kenya. 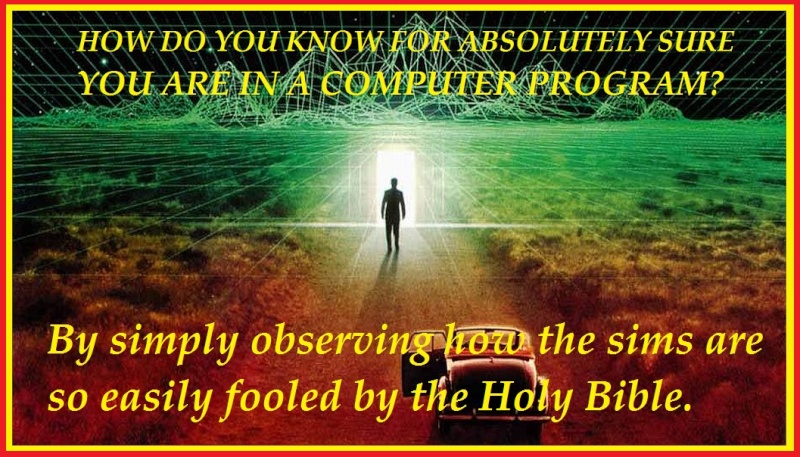 The Malevolent God in the Machine
One must consider that we live in a computer simulation and that God is the program director of the sim - a malevolent entity that wants violence in the flesh as a way to purify the souls being injected into the program.  Humans may be nothing more than surrogate meat-bags in a machine created realm. Let's break this down so that we can logically understand what is happening to us.  First we will assume what the major religions all teach is true - that humans are tri-part beings:  body, mind and flesh.  Two we are going to assume that earth is a purposefully manufactured hell realm just like in the movie 'The Matrix'. Finally we are going to assume there is a purpose to us being here and experiencing this tri-form, we are going to assume that the soul is the injected consciousness into the simulation, and the soul is here for growth, and that the greatest rate of growth is when you are under pressure, and that all this suffering in the flesh is for the soul's advancement. That may not sound fair but it is what many teachers are saying more or less. The soul is being purified in the earth hell realm.  Your body and expendable avatar for the other realm where souls reside. This is absolutely no different from a video game where the player can kill the characters. The game is a simulated reality, and your mind directing the character would be the soul to the sim. The soul in our realm is really the mind in the other realm. Make sense?

So what is the purpose of the oversoul, the computer God program in the Matrix?

To create the condition for drama and soul growth. In other words from our perspective, God would seem malevolent to the those in the flesh. To the other side, from where the sim is created, God is only a program being run to make things miserable on earth. How does God accomplish this feat in the Matrix? It uses its power to contact a certain tribe of sims called the Jews, and downloads his holy word into this one group that is obsessed with studying and maintaining the holy book - the words of God.  When the sims follow these holy words of God then the world turns into hell just as we see in the Middle East today. From our perspective, God seems like a conscious being, since you can communicate with it, pray to it, even worship it. Think that is crazy?  Human chimps have been erecting temples to this program for thousands of years, the grandest buildings ever erected at the greatest of cost were for the glory of god. We were completely intimidated and fooled by this god program. How do we know that we are in simulated realm? Top physicists say that the probability is like 99.999999999999999999% for a sim because any truly organic culture that reaches technological sophistication would eventually start running millions of computer programs to simulate the Universe.,That's what scientists say, but I say that you can also know by the downloaded book. The sim's (you and I) are easily duped by the higher mind.  Think how easy it is to fool a monkey. You have a bigger brain and can fool the ape easily, likewise god is the master brain running the machine and can fool you with his holy book. Isn't that disturbing?

Not only is it a virtual certainty that we are simulated, but your flesh expendable.  So are we mere toys of the gods?  Look at what we do here, we take pets just as we are pets. Look at the incredible violence of video games and compare that to reality. We a mimicking our predicament. When you wrap your mind around this possibility and see the rest of humanity as a bunch of programmed robots, you become the rebel, the anomaly in the matrix, the Neo, the first true soul breaking free of the program. And like the movie The Matrix, how much longer do we have once we become conscious that we are in a machine? Look around you, most people belong to some petty religion that to any thinker is ridiculous. People who are members of the many earth deity worshiping cults don't care who we bomb so long as we are bombing for our god. You have to be a monster to not care what we are doing to the people of Syria but those that worship the Jewish monster god don't care at all. If we are being simulated then the soul may be proof of the outside mind invading this realm.  If we are being simulated then the god phenomena may be proof of a malevolent program controlling us. I don't think the Universe is malevolent, but the human gods are. The malevolent god may be just mind control by aliens controlling the earth like a zoo.

First we will assume what the major religions all teach is true - that humans are tri-part beings: body, mind and flesh.

Third, what the major religions teach about man constitution is utterly wrong because they have ass-u-me-d something so utterly false due to heavy JEW corruption of the Bible, in this case the New Testament in particular. -- The Old Testament has absolutely nothing of this 3-part bullshit. -- And Jesus Christ never taught it.

I know for a fact that JEWS are almost daily laughing about our biblical ignorance (NOT MINE!!!!) particularly the stupidest American Christian Evangelical ignorance.

How do I know it?? -- More than 40 years ago, when I was investigating about the JEW agenda in the Middle East, I had some JEW acquaintances and, sometimes, I was invited to their boring parties because they appreciated my knoledge of the Bible and NOT being a JEW.

In almost all of those boring parties I have to admit to have laughed with them about the stupidest stupidity of Bible ignorance of the Americans in general. -- Later I realized that JEWS were really doing something wrong to Americans by bullshitting them to death so that they could use them for all their needs.

By 1996, upon learning more and more about their insane evil thinking, I decided to outdo them biblically. -- The result was a success : I lost instantaneously ALL my JEW acquantainces. -- EUREKA!!

Mind that it is since the early 1950s that I knew JEWS were terrible people because in my city almost all did not trust them and were telling me about them. -- But I had to get a life and not depress myself with JEW insanity. -- That's why it took long to realise, with strong evidence leading to proof, that JEWS were the satanic enemies of the White Europeans People on Earth.

Top physicists say that the probability is like 99.999999999999999999% for a sim because any truly organic culture that reaches technological sophistication would eventually start running millions of computer programs to simulate the Universe.

Don't you know that today top physicists are more than mostly JEWS?? -- And those who are not are subservient to the JEWS for obvious reasons that you also know even in details?? -- I believe that you also know that JEW physicists are the masters of statistic and probability and that a non JEW physicist MUST NOT disagree to much with THEM because THEY are very sensitive to the point of having those physicists fired if . . . etc, etc. -- NASA is totally controlled by JEWS.

I have a Canadian Mater in Theoretical and Solid State Physics and I have witness such firing in my department of Physics and even that of Mathematics.

That's enough for now. -- Later I will suggest you other thoughts.

Taken from a Yukon Jack update - Rebel of Oz Website - The graphics largely show the impact on the same wavelength as my frequencies of light & truth!
Current date/time is Sun Jun 20, 2021 7:14 pm