In the attachment you will find a lecture by Manly Hall on the nature of Greek and Roman spiritual life. 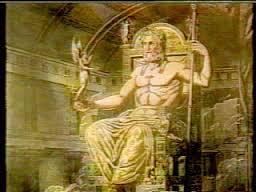 Zeus the Greek God Lord of the sky and supreme ruler of the Gods. Thrower of lightning bolts

Neptune God of the Sea

Here are the twelve Olympian gods and a brief description of each.
The Greeks and Romans shared the same stories, but used different names.

Lord of the sky and supreme ruler of the gods. Known for throwing lightening bolts.

Ruler of the sea. Brother of Zeus. Carried a three-pronged spear known as a trident.

Ruler of the underworld and the dead. Brother of Zeus. Had a helmet which rendered
its wearer invisible.

A virgin goddess and sister of Zeus. No distinct personality or part in myths. Goddess
of the Hearth, the symbol of the home.

Zeus's wife and sister. Protector of marriage, spent most of her time punishing the many
women Zeus fell in love with. Likes cows and peacocks.

God of war and son of Zeus and Hera. Likes vultures and dogs.

Daughter of Zeus alone. No mother.(?) She sprang from his head full-grown and in full armor.
The protector of civilized life, handicrafts, and agriculture. Invented the bridle, and first to
tame the horse. Likes Athens, olives, and owls.

Daughter of Zeus. Goddess of Love and Beauty. Likes the myrtle tree, doves, sparrows, and swans.

Son of Zeus. Wore wings on his sandals and his hat, thus was graceful and swift.

Apollo's twin sister and daughter of Zeus. Lady of wild things and huntsman to the gods. As Apollo is
the Sun, Artemis is the moon.

Son of Hera, God of Fire. The only ugly and deformed god. Makes armor and weapons forged under volcanoes.

Other Gods the names preceed the archetype or deity

Manly Hall on the nature of education

Manly Hall explains the state of education of the past and present, with a superb sense of humour and wit
orthodoxymoron

Thank-you for posting this, B.B. My theory is that most of the theologies and mythologies are cover-stories for the much more complex and nasty "Real-Stories" -- yet which reveal a lot of truth to those with eyes to see -- and ears to hear.

orthodoxymoron wrote:Thank-you for posting this, B.B. My theory is that most of the theologies and mythologies are cover-stories for the much more complex and nasty "Real-Stories" -- yet which reveal a lot of truth to those with eyes to see -- and ears to hear.

Oxy, I agree with you - the majority of the humanity has been deliberately deceived to 'believe' that the theologies (religions) and mythologies should be considered as real events, which of course is not true (or only partly). But as you said, it is revealed to those with eyes to see and ears to hear - or to those few "chosen ones" belonging to some circles...

This tubby ties in with the nature of those explaining the nature of an electric universe,
which are posted by bobhardee now, with the daily 5 minutes "weatherforecast".
It's also addressing the nature of magnetism, by the ideas and hypothesises of Mesmer,
Paracelcus and Arabic philosophers. Called "a mysterious fluid substance" and earthquakes were
explained as the act of "rocking the boat" meaning an influence on that mysterious fluid substance.
The sun was considered as radiating a magnetic field influencing the atmosphere of our
solar system. This lecture by Manly Hall is may be useful as an extra flavor to the "menu of the day".


To me, the subjects discussed in this lecture, by Manly Hall, are relevant to the truth disclosure within
and without, happening in the time we live now, anno 2015.

This is part of the lecture "Manly Hall - Esoteric Alchemy - Transformation of Attitudes". I've  extracted it, for I see the awareness of the soul as the mediator in making aquaintances, when we find ourselves in challenging situations "of the 3rd kind". Naturally, the first step is in making aquaintances with our true selves and with others, on the wild and tame side of life.

The wayshowers to that awareness are present in the minute details of our daily life and potentially visible to our own soul's eyes only. In other words, it's about minding our own business and finding truth, outside the realm of judgment. I don't suggest to study hard, follow instructions of some sort, or stand on our head, finding that awareness. We're the vip-guest and director of our own life-circus. Possibly the lion tamer and clown too

A sense of reality superior to thought is a profound point of view to me and the capacity to excersize all these roles in our circus
is exactly that sense of reality, as I see it: the creation of an extract derived from a variety of life-experiences, in time fitting and almost taken for granted, like a lifelong well-worn stola wrapped around one's body as a second skin. In short, a sense of reality enjoyed in comfort. 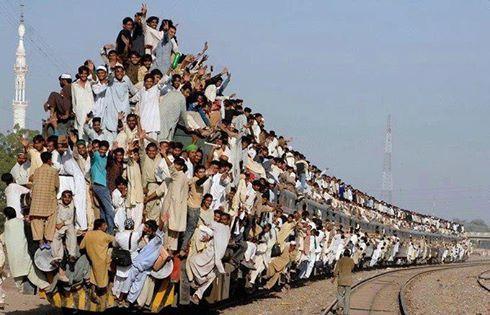 A unique way of using machines, a train decorated by human bodies, no safety rules attached,
just common sense, trust, support and probably a nonchalance to losing a leg or one's life?


An excellent presentation about the nature of the pyramids and how death was experienced and dealt with.
"The book of the dead" isn't the proper title of that book of Egypt, left with wisdom about this subject.
Current date/time is Mon Jun 01, 2020 9:07 am