The Main Factors for Big Change in 2013

2. Saturn / Rahu in Libra - January 14, 2013 - End of 2013
This Libra principle will be very magnified in 2013, with Rahu joined Saturn in Libra, through the middle of 2014. Saturn is exalted in Libra, so this conjunction with Rahu
will bring a lot of intelligent energy to our process,
but of course, our intelligence often comes in the form of noticing our painful mistakes.
When we're asleep and when we're ignorant of something,
we don't notice all of the dirt in the corners, but once intelligence
comes it is like a light shining in those dark corners of our psyche.

On April 25th there will be a lunar eclipse followed by the solar eclipse on May 10th.
The eclipses take place on the Libra-Aries axis this year.

6. Jupiter / Saturn Aspect - June 30th - July 10th
Jupiter's move into Gemini will also be creating some very important aspects
--namely on Libra and Aquarius.
As we will have Rahu and Saturn stationed in Libra, and a major eclipse taking place there,
this aspect is very important.

From June 30th until July 10th Jupiter will be placing a heavy aspect on exalted Saturn here,
which will be very powerful.

7. Lunar Eclipse in Aries - October 18, 2013
On October 18th the lunar eclipse will take place in Aries.
The Sun is barely in Libra then, at one degree, and the Moon is at the beginning of Aries.

8. Solar Eclipse in Libra - November 3, 2013
The second solar eclipse will happen on November 3rd, 2013.
Mercury will be retrograde, and Rahu, Moon, Sun and Saturn will all be in Libra as well.

9. Jupiter / Sun Aspect - November 8 - November 15, 2013
The final point to consider is that right after this eclipse, Jupiter will aspect the Sun.
Though the Sun is debilitated, Jupiter-Sun aspects are very important,
and this will occur from November 8th until around the 15th (with the solar eclipse November 3rd). 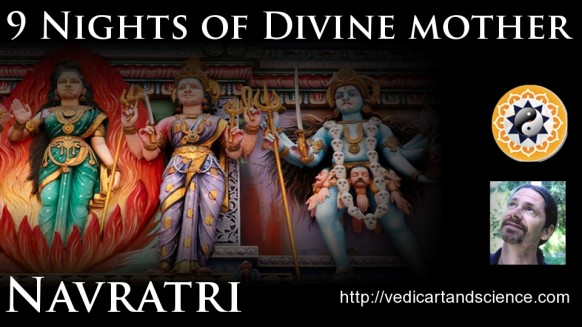 The Nine Nights of the Divine Mother Celebration began on Saturday,
and will play out for the next week or so.
This is a time to celebrate the sacred feminine principle here on earth in its 3 forms.

The Navratri celebration is symbolic of how life evolves and how we must overcome darkness in order to embrace the light.

Before we are purified by this process, all of our enjoyments
and teachings will be mixed with pain, attachment (Tamas) and selfishness (Rajasic).

The first of the three nights – mantras to Durga.
Om Dum Durgayaia Namaha

The second of the three nights – mantra to Lakshmi.
Om hrim Mahalakshmyai Namaha

The third of the three nights – mantra to Sarasawati.
Om Aim Saraswatyai Namaha
- See more at: http://www.mydailyastrology.net/join/news/nine-nights-divine-mother-navratri/#sthash.FnlOTqjz.dpuf
Current date/time is Fri May 29, 2020 3:47 am