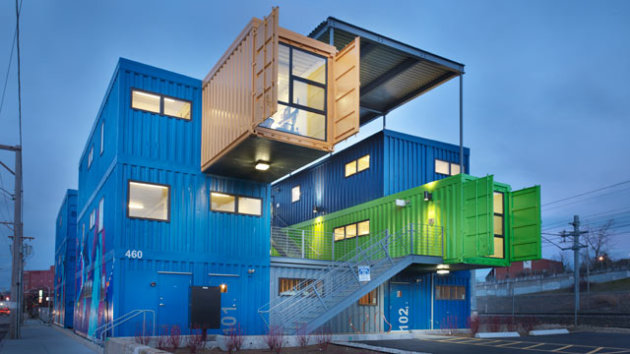 http://news.yahoo.com/shipping-containers-become-condos-detroit-110032447--abc-news-topstories.html
Shipping Containers to Become Condos in Detroit
The first U.S. multi-family condo built of used shipping containers is slated to break ground in Detroit early next year. Strong, durable and portable, shipping containers stack easily and link together like Legos. About 25 million of these 20-by-40 feet multicolored boxes move through U.S. container ports a year, hauling children's toys, flat-screen TVs, computers, car parts, sneakers and sweaters. But so much travel takes its toll, and eventually the containers wear out and are retired. That's when architects and designers, especially those with a "green" bent, step in to turn these cast-off boxes into student housing in Amsterdam, artists' studios, emergency shelters, health clinics, office buildings. Despite an oft-reported glut of unused cargo containers lying idle around U.S. ports and ship yards - estimates have ranged from 700,000 to 2 million - the Intermodal Steel Building Units and Container Homes Association puts the number closer to 12,000, including what's sold on Craigslist and eBay. Joel Egan, co-founder of HyBrid Architecture in Seattle, which has built cottages and office buildings from shipping containers for close to a decade and coined the term " cargotecture" to describe this method of construction, warns that although containers can be bought for as little as $2,500, they shouldn't be seen as a low-cost housing solution.

Exceptional Green Living on Rosa Parks, Detroit: Container to Condo
This 20-unit, four-story condo complex consisting of 93 stacked cargo containers - the first U.S. multi-family residence to be built from these discarded vessels - has been in the works for four years. Tabled when the national real estate market shattered, the project is now scheduled to break ground early next year in midtown Detroit. The units will come rigged with ductless heating and air systems, tankless water heaters and other energy-saving systems. "We're putting money into these energy efficiencies so that the tenant has reduced energy costs," says Leslie Horn, CEO of Three Squared, the project's developer. "And we can build in less than half the time."
_________________
What is life?
It is the flash of a firefly in the night, the breath of a buffalo in the wintertime. It is the little shadow which runs across the grass and loses itself in the sunset.
With deepest respect ~ Aloha & Mahalo, Carol
Current date/time is Mon Jun 01, 2020 3:35 pm