DISCOVERY OF MAYA CALENDAR IS A GAME CHANGER FOR DOOMSAYERS

DISCOVERY OF MAYA CALENDAR IS A GAME CHANGER FOR DOOMSAYERS

DISCOVERY OF MAYA CALENDAR IS A GAME CHANGER FOR DOOMSAYERS
CALENDAR DISCOVERY AT XULTUN
By James A. O’Kon, PE
The announcement of a sensational discovery of murals and calendar calculations, at the ancient Maya site of Xultún in Guatemala, is a boon for Maya archaeology and a real “reversal of the field” for doomsayers, who predict the end of the world on December 21, 2012. The newfound calendar calculations indicate a Maya calendar with a longer length of time equal to 17 baktuns rather than the 13 baktuns cycle that ends on December 21, 2012. A baktun is 144,000 days. The 17 baktuns equal a time period of time of 2,500,000 days or 6850 years, a longer time span than the 5126 years in the 13 baktun cycles. The current 13 baktun cycle ends on December 21, 2012. The new found 17 baktun cycle extends the Maya time line for an additional 1124 years to the year 3136 CE. The Xultún calculations do not identify a specific date but indicate that the Maya had all intentions of extending time into infinity, and December 21, 2012, is only a place mark in time.

The “doomsday” date of December 21, 2012 has been heralded by media hype to be the prediction of doom and gloom. Few people realize that the date of December 21, 2012, which is the end of the 13 baktun cycle, has been found on only one monument, in all of the Maya cities. The date is inscribed on a broken stele at the site of Totuguero near Tabasco, Mexico. Nowhere else in the approximately 40 to 50 thousand Maya monuments with carved hieroglyphics has this date been observed. The dates on certain monuments extend farther into the future, such as the inscription at the site of Pakal’s tomb at Palenque. Pakal’s tomb is inscribed with his birth date plus 20 baktuns to the date of October 13, 4772 AD which indicates that the Maya had all intention of extending time far into the future.

The calendar calculations and murals at Xultún were uncovered by William Saturno in 2011. The unprecedented discovery was a fortuitous find when a graduate student, Max Chamberlain, noted vestiges of paint on the interior walls of a Maya structure. Further excavation of the stone-filled chamber revealed the first Maya murals ever encountered in a building that was not a palace. In addition, it contained the oldest calendar calculations yet discovered. The structure has a 6 foot by 6.5 foot interior space. The murals were miraculously discovered to be in excellent condition. The murals had been protected from looters by the interior stone fill, but primarily their preservation was due to the advanced building technology of Maya engineers. This building system protected the building and it’s interior. The structure consists of a vaulted Maya arch (which I describe in detail in my book) which is constructed of a durable composite of cast-in-place concrete and stone. The outside of the structure was waterproofed by a coating of exterior stucco and an interior stucco plaster coating covered the internal walls and also served as a painting surface for the murals and calendric hieroglyphics. The east wall, which was painted with the mathematical calculations, had been plastered and re-plastered several times, indicating that they were apparently used it as a surface for painting calculations. The 40 square foot room was also installed with a built in stone bench, indicating that it was probably a studio for scribes and astronomers.

The use of this wall as a writing surface conjures up images of Albert Einstein calculating higher mathematics on a black board with chalk, or a modern physicist writing on a white board with an erasable marker. The Maya calculations were painted over layers of plaster that had covered previous calculations and the visible calculations are made in black paint with mathematical errors corrected in red paint. It appears that great minds have worked in the same manner for millennia.

This ancient “white board” calendar painted in 817 AD is a major find. Prior to this discovery the only Maya calendar was found in the Dresden Codex, an 11th or 12th century Maya book that survived the Spanish Conquest. This 9th century find at Xultún and the Dresden Codex were both based on earlier Maya books that had deteriorated long ago. David Stuart, an archaeologist and specialist in reading Maya glyphs, who deciphered the Xultún glyphs was quoted as saying “it’s very clear that the 2012 date, which is the end of 13 baktuns, while important as a turning of a page in time, the 14th baktun is going to be coming, and baktun 15 and baktun 16. The Maya calendar is going to keep going and keep going for billions, trillions, and octillions of years into the future.”

It appears that Saturno and Chamberlain knew they had a significant find, but they surprised the world and pulled a “Howard Carter”, the archaeologist who discovered King Tut’s tomb in Egypt. They uncovered an unprecedented archaeological treasure trove. Their find was not gold and jewels, but an immense archaeological breakthrough that will rewrite archaeological theories by unveiling the new calendric calculations and murals in this new venue.

The pair will go down in history not only for discovering an intellectual archaeological find, but also for reversing the playing field on the media hype and doomsayers who predict the end of the world on December 21, 2012. The doomsayers have predicted the end of the world by a variety of causes: collision with a dark planet, reversal of the poles, earthquakes or volcanic eruptions, to name a few. The Xultún evidence gives needed relief to millions of worry warts concerned with the end of the world. It also means that when you wake up on December 21, your only fear will be that there are only four more shopping days until Christmas.

From http://www.coasttocoastam.com/show/2012/11/05
_________________
What is life?
It is the flash of a firefly in the night, the breath of a buffalo in the wintertime. It is the little shadow which runs across the grass and loses itself in the sunset.
With deepest respect ~ Aloha & Mahalo, Carol
THEeXchanger

Re: DISCOVERY OF MAYA CALENDAR IS A GAME CHANGER FOR DOOMSAYERS

If the gregorian calender didn't exist before 1572
so, how could they have recorded a gregorian date ???

The Gregorian calendar is today's internationally accepted civil calendar
and is also known as the "Western calendar" or "Christian calendar".
It was named after the man who first introduced it in February 1582: Pope Gregory XIII.

Calendar features
The calendar is strictly a solar calendar based on a 365-day common year
divided into 12 months of irregular lengths.
Each month consists of either 30 or 31 days with 1 month
consisting of 28 days during the common year.
A Leap Year usually occurs every 4 years which adds an extra day to make the second month of February 29 days long rather than 28 days.

The Gregorian reform consisted of the following changes:

Sweden and Finland had a "double" Leap Year in 1712. Two days were added to February – creating a date of February 30, 1712. This was done because the Leap Year in 1700 was dropped and Sweden's calendar was not synchronized with any other calendar. By adding an extra day in 1712, they were back on the Julian calendar.

Therefore, back to the date of the painting ...
how could they have painted a gregorian date,
when the gregorian calendar wasn't invented until 1572 ??
they couldn't have been painting something that didn't yet exist
Eartheart

tripple rebirth of our sun - do not forget this date!!!

*** Sorry but this faked report from Xulkun means nothing, everybody can write endless math-numbers on drugs, they even say it was a lonely scientist using the tunched wall for exercises to prop his "I am"... 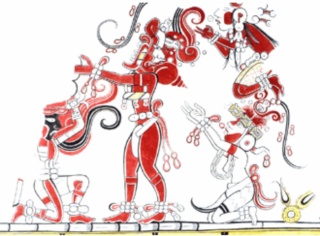 The 21.12.12. is the tripple rebirth of the sun, and it was looked for this rare happening for reasons of the
return of quetzal &&&, the doom was brought just by brutish imperial faith +++
According to dark planes & according to ascension the multitude is allready death, so no wonder when 4 so
many indis nothing is happening, they just miss the fun and to make something hapening. Drainbows...