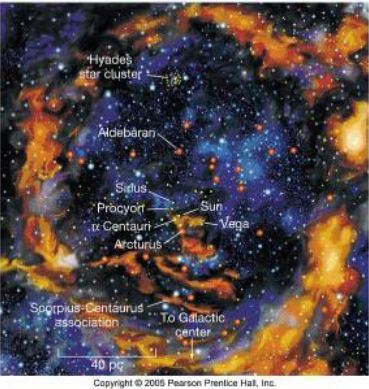 Full article: http://beforeitsnews.com/space/2012/10/earth-headed-for-unavoidable-collision-say-nasa-scientists-2448256.html
Earth Headed For Unavoidable Collision Say NASA Scientists
Few people know that the solar system happens to be at the center of an interstellar bubble that is virtually devoid of gas. That gas was blown out by supernovae, and we can determine when they occurred. Our solar system is traveling through this bubble and it is headed for an unavoidable collision, say NASA scientists. The consequences of this coming collision is unknown to our science at this time. The Local Bubble is a cavity in the interstellar medium (ISM) in the Orion Arm of the Milky Way which contains the Local Interstellar Cloud and G-cloud (as well as others). It is at least 300 light years across and has a neutral hydrogen density of about 0.05 atoms per cubic centimetre, or approximately one tenth of the average for the ISM in the Milky Way (0.5 atoms/cc), and one sixth of the “Local Fluff”, or Local Interstellar Cloud (0.3 atoms/cc). The hot diffuse gas in the Local Bubble emits X-rays. Researchers estimate (with considerable uncertainty) that a supernova less than 25 light years away would extinguish much of the life on Earth. The blast needn’t incinerate our planet. All it would take is enough cosmic rays to damage the ozone layer and let through lethal doses of ultraviolet (UV) radiation. Our ancestors survived the Pliocene blasts only because the supernovas weren’t quite so close. Our solar system may be headed for an encounter with a dense cloud of interstellar matter–gas and dust–that could have substantial implications for our solar system’s interplanetary environment, according to University of Chicago astrophysicist Priscilla Frisch. The good news is that it probably won’t happen for 50,000 years.

“This cloud, although low density on average, has a tremendous amount of structure to it,” Frisch said. “And it is not inconsistent with our data that the Sun may eventually encounter a portion of the cloud that is a million times denser than what we’re in now.”

Frisch believes the interstellar cloud through which we’re traveling is a relatively narrow band of dust and gas that lies in a superbubble shell expanding outward from an active star-formation region called the Scorpius-Centaurus Association. “When this superbubble expanded around these stars, it expanded much farther into the region of our galaxy between the spiral arms, where our sun lies, because the density is very low,” Frisch said. “It didn’t expand very far in the direction parallel to the spiral arms because it ran into very dense molecular clouds.”
_________________
What is life?
It is the flash of a firefly in the night, the breath of a buffalo in the wintertime. It is the little shadow which runs across the grass and loses itself in the sunset.
With deepest respect ~ Aloha & Mahalo, Carol
Current date/time is Mon Jun 01, 2020 3:27 pm