Anything for Love but I won't do that

THE LOST MEANING
OF DEATH
by
Alvin Boyd Kuhn,Ph.D.

the TREE of KNOWLEDGE
by
ALVIN BOYD KUHN
[1947]

THE LOST KEY TO THE SCRIPTURES
ALVIN BOYD KUHN, PH.D.

Psychologist Christopher Holmes discussed the physics and metaphysics of higher consciousness and the mysteries of the heart. People have a divine spark within the heart, a kind of "zero point" center that corresponds to ideas in new science, he said. Humans work on the same physics that are applied to the universe, he explained, and consciousness is not just in the head but all through the body, and may be related to blood flow.

We exist in interpenetrating dimensions, and according to the esoteric teachings of luminaries such as H.P. Blavatsky, there are seven dimensions that include the physical, astral, and mental realms. The inner self comes down out of the higher dimensions-- one such higher realm is the sun, which is inhabited in the form of "fire bodies," he detailed, adding that a "paradise level" of spiritual existence might reside in Earth's upper atmosphere.

Holmes was critical of film projects such as The Secret, because of its focus on thoughts-creating-reality. He stressed that the heart or feeling aspect gives form to attributes. He also commented that the movie placed too much emphasis on material rather than mystical goals.

The 16th chapter of the book
"Bringers of the Dawn - Teachings from the Pleiadians"
(by Barbara Marcinak) is called "Heretics ahead of time".
This highly recommended book has altogether 22 chapters.
[22 (is a master number) = LIGHT (in biblical numerolgy)]

'Ra' means 'One' in the Anuhazi language. So called "Golden Yellow Pleiadian Angelic Tribe Members" are also called Ra. Another group are the so called "Luciferian Pleiadians", who know some secrets about the dark side of the multiverse. The Pleiadians call people like me system busters of dark systems. Unfortunately planet Earth is still a relatively dark system, but the divine plan is that planet Earth should become a beacon of light in the multiverse, , the 'True Living Light of UR' and a gathering place for entities, who want to learn & teach about the holistic mysteries of creation & consciousness. 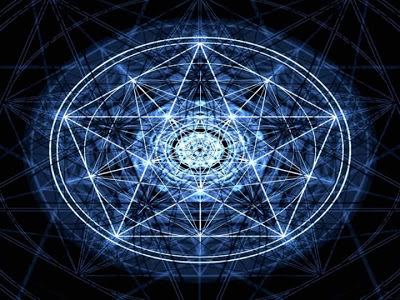 A pentagram (sometimes known as a pentalpha or pentangle or a star pentagon) is the shape of a five-pointed star drawn with five straight strokes. The word pentagram comes from the Greek word πεντάγραμμον (pentagrammon), a noun form of πεντάγραμμος (pentagrammos) or πεντέγραμμος (pentegrammos), a word meaning roughly "five-lined" or "five lines", from πέντε (pente), "five"+ γραμμή (grammē), "line".

Beauty and the Beast:S02 E05 God Bless The Child

Beauty and the Beast:S02 E05 God Bless The Child

The above is interesting in light of my strange ideas concerning a Namaste-Constitutional-Responsible-Freedom United States of the Solar System -- and that Responsibility and Law should be at the center of everything.
Aquaries1111

Being responsible for your biological computer

The above is interesting in light of my strange ideas concerning a Namaste-Constitutional-Responsible-Freedom United States of the Solar System -- and that Responsibility and Law should be at the center of everything.

We the People are the New Powers That Be!

NEW 1/9/12 States confirm the IRS is not registered to do business
No. Carolina Letter PDF
Texas Letter PDF

NEW 1/4/12 HISTORY Not Now Taught in Public Schools:
The Cover-Up of the Truth PDF

1868 Inaugural Speech of Governor Worth PDF

The Bill of Rights Fraud Part I PDF

WAS WASHINGTON, D.C. A STATE THEN PDF

What Does Federal Really Mean PDF

WHY DOES THE STATE HAVE JURISDICTION OVER ME PDF

Definitions that enslave you PDF

Regroup to find the truth PDF

Why All States Depend on Federal Determination to Tax You PDF

HISTORY of the BRITISH SUBJECTS PDF

SS# and TIN IS NOT THE SAME PDF

This is not conjecture, this is not myth, etc PDF
THINKORBEEATEN.COM

The Bible is NOT a Literal Book

This is a interview with Stan Tenen from 2009 on Feet To The Fire.

Stan Tenen is the Director of Research for the Meru Foundation of Sharon, Mass. With a B.S. in Physics (1963) from Brooklyn Polytechnic Institute, Mr. Tenen has designed and produced optical and electronic equipment for doctors and surgeons, and holds several patents. In 1968, while examining the Hebrew text of Genesis, Mr. Tenen noticed what appeared to be a pattern in the arrangement of the letters. This observation, which prompted forty years of research into the history and tradition of the text, has led to a meaningful understanding of traditional teachings in a modern context.

The process of dissolving dark shadows among hearts of all clients of the dark is now proceeding with full participation of Light Forces. The crystal forms that enter the dark hearts begin to effervesce upon entering at the 5-6-7th dimensional portal, followed by descent into 4D, then 3D.

A burning sensation may be sensed in those affected. This includes those agreed to be working with Light Forces as well as those who have agreed to continue assisting the dark. All shadows will be eliminated by the ebullient crystal bubbles that result from the transformation of shadow into Light.

There is no stopping this in any being as they enter via the Grand Vortexes and Stargates of Gaia, from within, just as the crystals enter from within (5-6-7 D) to without (4 to 3 D).

The Bush Talks And Its Not George

The Bush Talks And Its Not George