Cinnamon and Honey - start your day with it - amazing cures etc.,

Cinnamon and Honey - start your day with it - amazing cures etc.,

Honey is the only food on the planet that will not spoil or rot. It will do
what some call turning to sugar. In reality honey is always honey. However,
when left in a cool dark place for a long time it will do what I rather call
"crystallizing" . When this happens I loosen the lid, boil some water, and
sit the honey container in the hot water, off the heat and let it liquefy.
It is then as good as it ever was. Never boil honey or put it in a
microwave. To do so will kill the enzymes in the honey.

Bet the drug companies won't like this one getting around.
Facts on Honey and Cinnamon:
It is found that a mixture of honey and Cinnamon cures most diseases.
Honey is produced in most of the countries of the world. Scientists of today
also accept honey as a 'Ram Ban' (very effective) medicine for all kinds of
diseases.
Honey can be used without any side effects for any kind of diseases.
Today's science says that even though honey is sweet, if taken in the
right dosage as a medicine, it does not harm diabetic patients.
Weekly World News, a magazine in Canada , in its issue dated 17
January,1995 has given the following list of diseases that can be cured by
honey and cinnamon as researched by western scientists:

HEART DISEASES:
Make a paste of honey and cinnamon powder, apply on bread, instead of jelly
and jam, and eat it regularly for breakfast. It reduces the cholesterol in
the arteries and saves the patient from heart attack.
Also, those who have already had an attack, if they do this process daily,
they are kept miles away from the next attack. Regular use of the above
process relieves loss of breath and strengthens the heart beat.
In America and Canada, various nursing homes have treated patients
successfully and have found that as you age, the arteries and veins lose
their flexibility and get clogged; honey and cinnamon revitalize the
arteries and veins.

ARTHRITIS:
Arthritis patients may take daily, morning and night, one cup of hot water
with two spoons of honey and one small teaspoon of cinnamon powder. If
taken regularly even chronic arthritis can be cured. In a recent research
conducted at the Copenhagen University, it was found that when the doctors
treated their patients with a mixture of one tablespoon Honey and half
teaspoon Cinnamon powder before breakfast, they found that within a week,
out of the 200 people so treated, practically 73 patients were totally
relieved of pain, and within a month, mostly all the patients who could not
walk or move around because of arthritis started walking without pain.

BLADDER INFECTIONS:
Take two tablespoons of cinnamon powder and one teaspoon of honey in a glass
of lukewarm water and drink it. It destroys the germs in the bladder.

CHOLESTEROL:
Two tablespoons of honey and three teaspoons of Cinnamon Powder mixed in 16
ounces of tea water, given to a cholesterol patient, was found to reduce the
level of cholesterol in the blood by 10 percent within two hours.
As mentioned for arthritic patients, if taken three times a day, any chronic
cholesterol is cured. According to information received in the said Journal,
pure honey taken with food daily relieves complaints of cholesterol.

COLDS:
Those suffering from common or severe colds should take one tablespoon
lukewarm honey with 1/4 teaspoon cinnamon powder daily for three days. This
process will cure most chronic cough, cold, and clear the sinuses.

GAS:
According to the studies done in India and Japan, it is revealed that if
honey is taken with cinnamon powder the stomach is relieved of gas.

IMMUNE SYSTEM:
Daily use of honey and cinnamon powder strengthens the immune system and
protects the body from bacteria and viral attacks. Scientists have found
that honey has various vitamins and iron in large amounts. Constant use of
Honey strengthens the white blood corpuscles to fight bacterial and viral
diseases.

INDIGESTION:
Cinnamon powder sprinkled on two tablespoons of honey taken before food
relieves acidity and digests the heaviest of meals.

INFLUENZA:
A scientist in Spain has proved that honey contains a natural ' Ingredient'
which kills the influenza germs and saves the patient from flu.

LONGEVITY:
Tea made with honey and cinnamon powder, when taken regularly, arrests the
ravages of old age. Take four spoons of honey, one spoon of cinnamon powder,
and three cups of water and boil to make like tea. Drink 1/4 cup, three to
four times a day. It keeps the skin fresh and soft and arrests old age. Life
spans also increase and even a 100 year old, starts performing the chores of
a 20-year-old.

PIMPLES:
Three tablespoons of honey and one teaspoon of cinnamon powder paste. Apply
this paste on the pimples before sleeping and wash it next morning with warm
water. If done daily for two weeks, it removes pimples from the root.

SKIN INFECTIONS:
Applying honey and cinnamon powder in equal parts on the affected parts
cures eczema, ringworm and all types of skin infections.

WEIGHT LOSS:
Daily in the morning one half hour before breakfast on an empty stomach, and
at night before sleeping, drink honey and cinnamon powder boiled in one cup
of water. If taken regularly, it reduces the weight of even the most obese
person. Also, drinking this mixture regularly does not allow the fat to
accumulate in the body even though the person may eat a high calorie diet.

CANCER:
Recent research in Japan and Australia has revealed that advanced cancer of
the stomach and bones have been cured successfully. Patients suffering from
these kinds of cancer should daily take one tablespoon of honey with one
teaspoon of cinnamon powder for one month three times a day.

FATIGUE:
Recent studies have shown that the sugar content of honey is more helpful
rather than being detrimental to the strength of the body. Senior citizens,
who take honey and cinnamon powder in equal parts, are more alert and
flexible. Dr. Milton, who has done research, says that a half tablespoon of
honey taken in a glass of water and sprinkled with cinnamon powder, taken
daily after brushing and in the afternoon at about 3:00 P.M. when the
vitality of the body starts to decrease, increases the vitality of the body
within a week.

BAD BREATH:
People of South America, first thing in the morning, gargle with one
teaspoon of honey and cinnamon powder mixed in hot water, so their breath
stays fresh throughout the day.

HEARING LOSS:
Daily morning and night honey and cinnamon powder, taken in equal parts
restores hearing. Remember when we were kids? We had toast with real
butter and cinnamon sprinkled on it!

I posted this a while back, and was also planning to post a Vit D and calcium/ cancer today.

Can also be applied topically!

we grew up;
on raw cane sugar
and, real honey - as, well as propis ?
and, utilsing real beeswax candles
and, even cooked on those, while camping
and, also cinnamon / and, honey on many grain bread,
in the morning ~ perhaps; it is why, we live in an ache free/pain free body at 50+ ??? ~susan


I remember, when I was an OT student back in 1983,
a Physio telling me she treated deep pressure sores with honey, and ultraviolet light

Hubby just brought home a jar of unpasteurized raw honey and I mixed it with my fresh raw lemon juice and it was delicious.

My first husband was cured of his seasonal allergies when I spread honey cappings from a local beehive on his toast.

I was lightly researching the different types of cinnamon on the internet and have not decided which species and form of cinnamon is the most effective. I did notice that cinnamon reduced my insulin response regarding sweets.

Warmed honey mixed with pure unfiltered apple cider vinegar in a tonic is an amazing cure-all.


wow, I start every day with Cinnamon and honey in my coffee, and of course a dash of nutmeg too...

I ran out of sugar one morning so stirred in honey instead and it just tasted so good I never went back...

What a pleasant change to some of the recent threads we've all read.

Anyway, to contribute something to your post, how about freezing some honey/cinnamon mixture in say an empty chocolate box tray, to form little frozen medi-sweets or medi-candy?

Ideal for soothing a sore throat I expect.
Possibly the worlds best "chill pill"? ~ now, this is a good idea

this gets your bowels moving !!!
THEeXchanger

get local non pasturized honey , along with the pollen 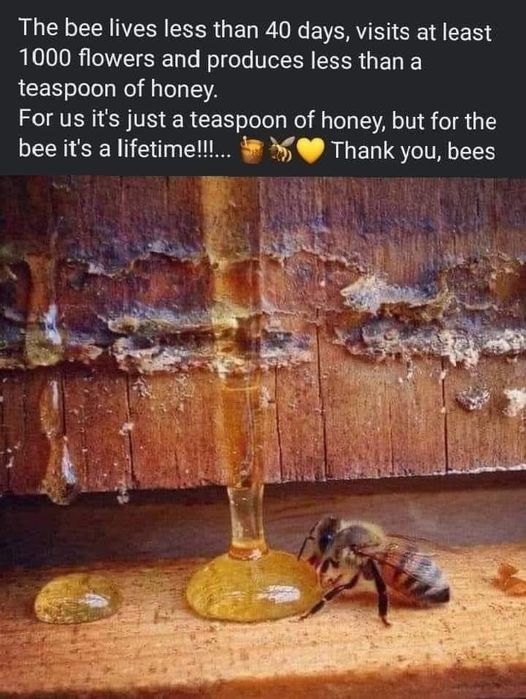 The be
Honey Bee lives less than 40 days and 40 nights,
and, it visits at least 1000 blooms of flowers,
so it can produce less than 1 teaspoon of honey...
NOW, for us, iT iS just a teaspoon of honey,
but, for the bee, iT iS THE STORY of their whole lifetime !!!

EVER THiNK what you do,
makes NO DiFFERENCE ???


Curative
Avalon Senior Member
SAYS:
"Thanks, eXchanger
This is just the sort of thread topic that first convinced me to join Avalon back in Sept' 08.
BTW I was called "Consciousness" then."

This is a great thread. I used to put a teaspoon of cinnamon in my coffee every morning and it eliminated joint pain. Works great. Except I don't drink coffee any more and switched to tea. The honey and cinnamon in hot water sounds good as does putting it on the morning toast.

I also had a few hives in Hawaii which provided some amazing flavor dark honey similar to Manuka. Our friends dog's paw was in serious shape and we wrapped it in honey covered with saran wrap on the outside to hold it all together. It worked wonders.

Thanks Susan for the additional usage tips.

Mānuka honey is a monofloral honey
produced from the nectar of the mānuka tree, Leptospermum.
There is no conclusive evidence of medicinal or dietary value in using mānuka honey
other than as a sugar substitute.


The word mānuka is the Māori name of the tree; the spelling manuka (without a macron) is common in English.


all honey is healing on wounds, but, i think this one is very exceptional

The overall effect is to reduce infection and to enhance wound healing in burns, ulcers, and other cutaneous wounds
. It is also known that honeys derived from particular floral sources in Australia and New Zealand (Leptospermum spp)
have enhanced antibacterial activity, and these honeys have been approved for marketing as therapeutic honeys

Almond milk with cinnamon and honey heated is delicious way to start or end the day.
_________________
What is life?
It is the flash of a firefly in the night, the breath of a buffalo in the wintertime. It is the little shadow which runs across the grass and loses itself in the sunset.
With deepest respect ~ Aloha & Mahalo, Carol
Current date/time is Thu Jan 27, 2022 11:34 pm