This was in weird news, and it is. I wonder if he saw the aliens, too?


An unusual burial may have outed the world's first known gay caveman, whose bones were discovered outside Prague in a grave that indicates he was homosexual or possibly transgendered.

During the Copper Age 5,000 years ago, men were traditionally buried facing the west, along with weapons and knives. But archaeologists in the Czech Republic say the skeletal remains of the newly discovered caveman were found facing the east, along with household items like water jugs and pots, funeral rites almost always reserved for women in the region during that time. 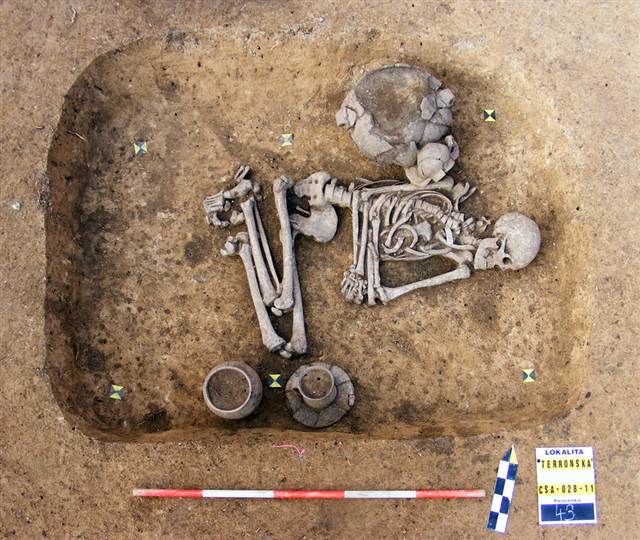 The skeleton of a Stone-Age man, dating back to about 2,500 to 2,800 B.C., found on the outskirts of Prague. He was buried on his left with his head facing west — a traditionally female position.

'Gay caveman' theory gets a rocky reception
Definitely not a caveman, and could be a third gender, archaeologists warn

Archaeologists in Prague say they've uncovered a Stone-Age man buried in a position usually reserved for women — but media claims of a "gay caveman" may be exaggerated, according to some researchers.

The skeleton, which dates back to about 2,500 to 2,800 B.C., was found in the outskirts of Prague. The culture the man belonged to (known as the Corded Ware culture for their pottery decorated with the impressions of twisted cord) was very finicky about grave rituals, reported Iranian news network Press TV, which visited the excavation site. According to the Czech news website Ceskapozice.cz, Corded Ware males were usually buried on their right sides with their heads facing east. This man, however, was buried on his left with his head facing west — a traditionally female position.

The "gay caveman" media mystery
A 5,000-year-old man sets off sensational coverage -- and shows how far we haven't come in gender awareness

When news broke yesterday that archaeologists had uncovered the remains of a 5,000-year-old man in the suburbs outside of Prague, the big surprise, proclaimed in headlines around, was that it was of a "gay caveman." (The Daily News, as if referring to a caveman senator caught on the down low, described him reservedly as just a "suspected gay caveman.")

What, you ask, led to such an intimate conclusion about a 5,000-year-old who was "outed by the way he was buried"? Did he have an especially neat cave? Was he laid to rest with a rainbow flag and some military discharge papers? Did the markings on his grave look like they were done by Tom of Finland? No, it was because he "was buried in a manner normally reserved only for women." Buried like a woman. That's so gay!

Back in the day 2,900 to 2,500 years ago, when the man Fox called a "stone age gender bender" shuffled off the mortal coil, the ladyfolk were laid to rest facing east, accompanied by such domestic knickknacks as jewelry and pottery. Dudes, on the other hand, met their makers facing west, accompanied by manly gear like weapons, tools, a copy of Maxim and a can of Axe body spray. And as the Telegraph explained in its report on the "first homosexual caveman," this guy was pushing daisies facing east, with a couple of jugs for company on the journey to the afterlife. Lead archaeologist Kamila Remisova Vesinova told the paper, "From history and ethnology, we know that people from this period took funeral rites very seriously so it is highly unlikely that this positioning was a mistake. Far more likely is that he was a man with a different sexual orientation, homosexual or transsexual ... We believe this is one of the earliest cases of what could be described as a 'transsexual' or 'third gender grave' in the Czech Republic."