In regards to that video above Mudra it is all just one big distraction. Yes Kerry and his ilke may be admitting sodium and potassium fluoride are chemical weapons however it is downright ludicrous for the "thinking Joe" to believe that these particular chemical weapons killed the people in Syria...remember they believe the sheeple don't have a brain so they'll believe anything if the media tells them so...in it's farcical assertions the media is doing the opposite to prove the obvious that sarin or nerve gas was used which suits people like Kerry, McCain and Lindsey Graham fine.
Dirty trick tactics...they'll try anything including repeating themselves endlessly on the mainstream news that sarin and nerve gas was used and Assad is at fault. During Bush Jr. and Cheney's time they did the repeating trick too on the news. Drum it home constantly and eventually the sheeple will believe.
Maybe they might use their imagination occasionally and learn a mantra/meditate.

Of course you are right Jenetta.
Thanks for your comment.

Iraq and Libya have been taken out, and Iran has been heavily boycotted. Syria is now in the cross-hairs. Why? Here is one overlooked scenario . . .
In an August 2013 article titled “Larry Summers and the Secret ‘End-game’ Memo,” Greg Palast posted evidence of a secret late-1990s plan devised by Wall Street and U.S. Treasury officials to open banking to the lucrative derivatives business. To pull this off required the relaxation of banking regulations not just in the US but globally. The vehicle to be used was the Financial Services Agreement of the World Trade Organization.
The “end-game” would require not just coercing support among WTO members but taking down those countries refusing to join. Some key countries remained holdouts from the WTO, including Iraq, Libya, Iran and Syria. In these Islamic countries, banks are largely state-owned; and “usury” – charging rent for the “use” of money – is viewed as a sin, if not a crime.That puts them at odds with the Western model of rent extraction by private middlemen. Publicly-owned banks are also a threat to the mushrooming derivatives business, since governments with their own banks don’t need interest rate swaps, credit default swaps, or investment-grade ratings by private rating agencies in order to finance their operations.
Bank deregulation proceeded according to plan, and the government-sanctioned and -nurtured derivatives business mushroomed into a $700-plus trillion pyramid scheme. Highly leveraged, completely unregulated, and dangerously unsustainable, it collapsed in 2008 when investment bank Lehman Brothers went bankrupt, taking a large segment of the global economy with it. The countries that managed to escape were those sustained by public banking models outside the international banking net.
These countries were not all Islamic. Forty percent of banks globally are publicly-owned. They are largely in the BRIC countries—Brazil, Russia, India and China—which house forty percent of the global population. They also escaped the 2008 credit crisis, but they at least made a show of conforming to Western banking rules. This was not true of the “rogue” Islamic nations, where usury was forbidden by Islamic teaching. To make the world safe for usury, these rogue states had to be silenced by other means. Having failed to succumb to economic coercion, they wound up in the crosshairs of the powerful US military.
Here is some data in support of that thesis.

Compulsory reading for anyone who is wants to understand all the angles and experience some additional depth in understanding regarding the West’s rush to destablise, and ultimately destroy the nation-state of Syria over the last two years.
burgundia


A former member of a city council in the Turkish province of Hatay says the chemical weapons used in last month's attack in Syria were transported from Turkey, Press TV reports.

"Four months ago, Turkish security forces found a two-kilogram cylinder with sarin gas after searching the homes of Syrian militants from the al-Qaeda and al-Nusra. They are using our borders to take the gas into Syria," Mohamad Gunes said.

"The Syrian president has no reason to kill his own people," he added.

People in the southern province, which borders Syria, said the weapons were used by the al-Qaeda-linked al-Nusra Front militants and not the Syrian government.

"America and Israel had al-Qaeda use chemical weapons in order to push us into war; none of us wants war here. In the history of Hatay, we all lived peacefully side by side, now there is Mossad, CIA and al-Qaeda all over the place. We are worried that they might use chemical weapons against us," said Farid Mainy, a Hatay resident and an activist.

The residents believe the Turkish government is allowing the transfer of weapons because Ankara is trying to create a pretext in order to wage war on its neighbor.

US President Barack Obama is trying to convince the Congress to approve a military strike against Syria over the alleged use of chemical weapons by the Syrian government.

Washington says it has obtained evidence proving the Syrian army was behind the chemical attack near Damascus on August 21, which killed hundreds of Syrians.

The Syrian government has repeatedly said that the deadly attack was carried out by militants operating inside the country in a bid to draw in a foreign military intervention.

On Monday, Russia dismissed as "absolutely unconvincing" the evidence presented by the US accusing the Syrian government of the gas attack.

"When you ask for more detailed proof, they say all of this is classified so we cannot show this to you," Russian Foreign Minister Sergey Lavrov stated.

Syria has been gripped by deadly unrest since 2011. According to reports, the Western powers and their regional allies -- especially Qatar, Saudi Arabia, and Turkey -- are supporting the militants operating inside Syria.

In a statement issued on Tuesday, the United Nations High Commissioner for Refugees (UNHCR) said the number of Syrian refugees, who have fled the country's 29-month-long conflict, reached two million.

"Syria is hemorrhaging women, children and men who cross borders often with little more than the clothes on their backs," the UNHCR said.

The UN refugee agency also said some 4.2 million people have also been displaced inside Syria since the beginning of the conflict in the Arab country.

YOu have to go to about the 40 minute mark before John Hogue starts talking. His focus on the middle east is well worth the listen.
mudra

The Geopolitics of the Syrian War - Sharmine Narwani on GRTV

Question: Was the U.S. use of nuclear weapons resulting in the mass and indiscriminate killing of civilians in both Hiroshima and Nagasaki a violation of the same international law that you are referring to?

Answer: I’m not even going to entertain that question, Arshad.

-- Reuters journalist Arshad Mohammed asking a question to State Department Deputy Spokesperson Marie Harf about the U.S. State Department's position on the apparent use of chemical weapons by the Syrian government.

How hypocritical from a government to complain about the war in Syria instigated by the friends of the CIA when the US government has been experimenting for decades with the effects of chemical weapons on citizens ?  Even president Clinton had to apologize to the public !
The problem with the USA government is that it admits to mistakes 50 years LATER . The other mistake is that criminals NEVER LEARN !


" America's history of chemical weapons 'experiments' against its own people: The Manchester Mill anthrax case "

In Syria sleeping between his parents 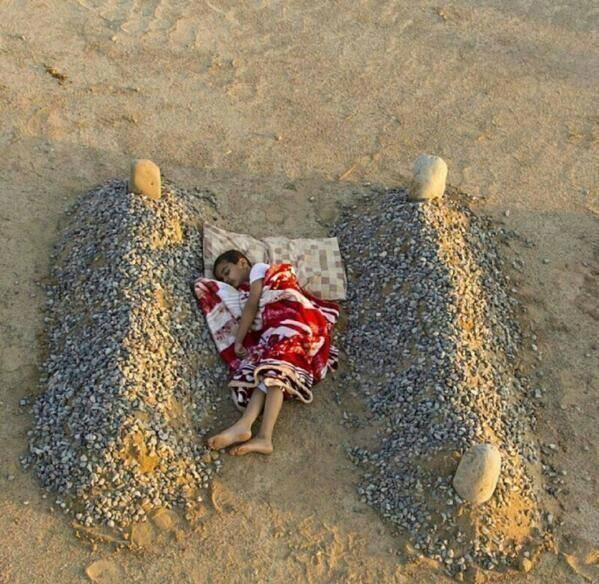 No, this is NOT Hiroshima in WWII--This is Homs, Syria...today!


Muslims Take Fifty Innocent People, Cut Their Heads Off, And Place Their Heads On Poles All Throughout The Area (Must See Footage)
By Ted on July 26, 2014 in Featured, General, Highlight

After the ISIS defeated the Raqqa base manned by Division 17 of the Syrian army, the countless POWs were then beheaded and their heads were displayed for public view in the city square.

Shoebat.com was the first to obtain this extremely gory footage:

Shoebat.com also translated what the ISIS spokesperson said during the filming:

In the name of Allah, most gracious, most merciful
He had fulfilled his promise and defeated the enemy by himself.
Your brothers here, the soldiers of the Islamic Caliphate,
Allah had blessed us a great blessing from him.

He had allowed us to defeat Division 17. This is a victory from Allah.
We thank Allah for our strength and power, and our armament.
Today, and till the day of judgement, devils who Allah had allowed us to defeat,
and to be hung in this place, and we ask Allah to complete this victory the great victory of your brothers in the Islamic Caliphate.

Allah had promised the believers that they will dominate the land as it was dominated previously. And will strengthen the religion to be acceptable to him.

“And after their fear he will give them safety to worship me, that they may not worship others besides me and whoever disbelieves, these are the wrongdoers. They must worship me! and must associate anyone with me” (Quran), and that means that they believe in the absolute oneness of Allah. The nation has been victorious, that its base is the unique oneness of Allah. Just as Muhammad was victorious in Mecca when he was surrounded for three years, but the oneness faith has proclaimed itself in the hearts in the individuals, and Allah gave them victory over the land. Here are your brothers, by the will he gave them victory with the oneness of Allah, to defeat the kafirs. But when the oneness was proclaimed, your brothers were victorious. Here are heads that have ripened, that were ready for the plucking.

Division 17 is the largest military base of its kind in north-eastern Syria and is said to be well-stocked with weapons and ammunition.

The ISIS spokesperson continued to speak to each head asking them “why didn’t you defect” as a warning to other Syrian soldiers. “The Oneness” the spokesperson mentions is regarding Allah not being Triune and is the basis of Islam’s war with Christianity. Regardless that the victims are Shiite, ISIS proclaims it ultimate goal is to establish the oneness faith over Christianity which believes in the Trinity.

Below the article they collect money to save Christians.....where is the Xxxxxxxx Pope with Vatican's money?
Go to page :