Explosion on the Sun - Solar Storms

Explosion on the Sun - Solar Storms

Explosion on the Sun

Solar storms is in itself quite common and leads to the northern lights. Most are relatively weak, but about once every ten years there will be a powerful one.

- It is a kind of explosion or a gas outburst, which sends X-rays and a gas cloud particles into space. If this gas cloud hit the Earth's magnetic field that protects us, so the magnetic field begins to shake and tremble, "said Brekke

A Solstorm can cut the power and destroy satellites. Now NASA makes a new system that will make us better prepared when they arrive.

In Norway, we can notify the solar storms now. But Brekke hope the new system will give us faster and better than before.

- You can compare the system with if there would be a hurricane or a low pressure against Norway. Then yr.no weather alert a few days in advance and say that it's going to be bad weather, "said Brekke.

The system will initially be used in North America, but Brekke believes that Norway will also be able to take good advantage of the experiment.

http://www.vg.no/nyheter/innenriks/artikkel.php?artid=10011343
_________________
What is life?
It is the flash of a firefly in the night, the breath of a buffalo in the wintertime. It is the little shadow which runs across the grass and loses itself in the sunset.
With deepest respect ~ Aloha & Mahalo, Carol
Carol

Re: Explosion on the Sun - Solar Storms 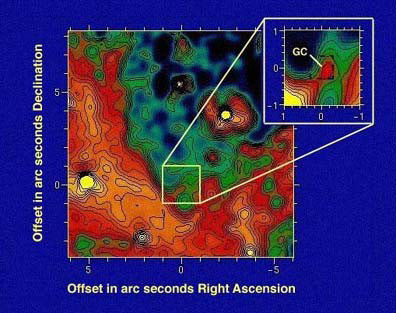 Figure 1-b (right). Infrared image of the Galactic center radio-emitting source Sagittarius A* seen at a wavelength of 8.7 microns (red spot marked as GC). Taken with the Hale Telescope. (Courtesy of Stolovy, Hayward, and Herter)
Galactic Cosmic Ray Volleys: A Coming Global Disaster

Galactic core outbursts are the most energetic phenomenon taking place in the universe. The active, quasar-like core of spiral galaxy PG 0052+251 (Figure 1-a), for example, is seen to radiate 7 times as much energy as comes from all of the galaxy's stars. Most of this is emitted in the form of high energy cosmic ray electrons accompanied by electromagnetic radiation ranging from radio wave frequencies on up to X ray and gamma ray frequencies.