Carol,
I have been checking your posts weekly as I see you research the topic extensively and most of which I have noted is based on personal observations. Some info I have gleaned from fellow employees and companies involved in our GPS survey software.
In 1997 my wife(common-law if you can find a difference I can't) bought a house in a moderate sized community in Norther ALberta and we both liked the fact that the bedroom(Easterly facing) was well lit in the mornings. I get up every morning at exactly the same time and am well aware of the location of shadows from the sun hitting the window frame. I did however not document these positions. Doh! Every year the sun when I woke up was always in my face until ALWAYS June 21. At that date the window sill blocks the sunlight from hitting my side of the bed. We do seasonally move the bedroom furniture to take advantage of the sunlight but since it is annoying to me June 21 is always welcome. Well months after the Sumatra earthquake struck the sun was still in my face when I woke up on June 21, 2005. You can imagine my consternation both personally and professionally. The blessed shadow returned 2 days later, that doesnt seem like much but it amounts to over a degree of axial tilt which since as of that day I have written down the date of the returning shadow(JUNE 23). I have personally polled coworkers and people in the industry and only 2 of my coworkers not only noticed but have also begun their own examinations.
In our company we have surveyors on staff who survey points for drilling of test wells or sites for environmental testing. The main equipment was purchased and is maintained from Trimble and uses both our GPS and the Russian GNSS GPS sattelites. However there are also instruments from Trimble that are based on the old style Electromic Distance Measuring (EDM) instruments based on angles and distances which are modernised with computers inside and us RF and lasers for distance measuring. The EDM's are periodically re-checked for accuracy doing a "sun-shot" where the onboard software updates and callibrates the intruments position based on the suns position in our sky at certain times and lattitudes. In 2005 Trimble and GNSS released updates to thier GPS and EDM positioning software. Upon querying Trimble Canada for the reasons of this software update the maintenance rep replied that because of the axial shift posiitions had to be updated for the instruments to maintain their millimeter accuracy. Other than my personal observations, nothing had been confirmed semi-officially until then. I had always until that moment had the nagging thought that I had been mistaken about the position of the sun. I felt better knowing I hadnt, but also alarmed. There are hints of this on the web but other than a few who have done their research but are not published nothing official has been released in the news. I cannot understand this, as this potentially affects everyone on the planet from Ethiopian cattle-herders to Arctic researchers.
I will try to put together some more information on the subject that has more facts and not info from a bedside notebook. This week I am at a Project Managers conference in Edmonton and will try to update as possible.

Romiascendant - That is some Awesome Observing...

GJ and please keep Us updated with whatever You can RE: This Axial Tilt and It's progression...

Yep - I knew It - Just another in a long line of Vindications. Funnier yet though is that each one of these Vindications seems to make Me Numb'er...

You'd think I'd be out saying - "See, See - I told You" - But Alas - These Things We talk about are not talked about out of a desire to chat about them for the sake of chat but rather - Because We must in order to be Our Own Saviours...

Thank you. I will be watching for your updates.

romiascendant, thank you for sharing these observations.

After some more extensive research I've come to the conclusion that it's not ever going back to the way it was and earth changes will continue to accelerate until something major happens (most likely a pole shift). 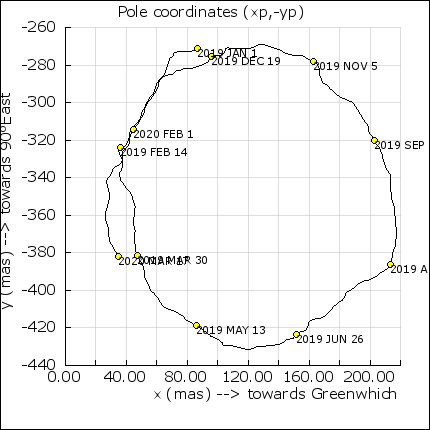 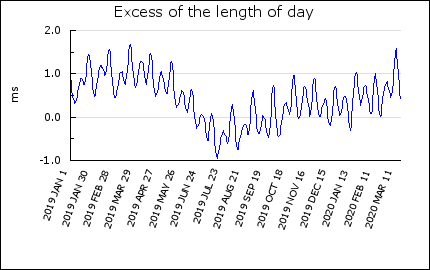 These time series are derived from the various astro-geodetic techniques (LLR, SLR, GPS, VLBI and DORIS).

I live in the Swiss Alps, in certain points of my house, my compass points about 5° of South!! Instead of North!

I couldn't believe it, so I bought a new compass. Exactly the same.

I believe in the pole shift, there is enough evidence for it, read the Flower of Life, by Drunvalo.

However, compasses are very sensitive to magnetic disturbances, especially non-professional compasses. But since my compass differs 175°!! It is hard to believe this has been so for a very long time. My point:

The earth magnetic field is changing, that is why dolphins and whales are stranding (they follow these lines who have shifted over land). It is changing rapidly, causing people to get more and more confused. All the more reason to start meditating and protecting ones energetic field. The energies are intensifying...

Living in the Alps, (btw I am not Swiss but Belgian) on an area with strong tectonic activity (more geopathic stress) might affect a compass stronger...


One more thing, the magnetic field of this planet ties into the morphogenic (probability) field. If one is out of alignment so is the other. Why do you think that non-civil wars throughout history have never been won by the country southward of the other. Most the south can hope for is a tie.
MMIP(Mind Machine Interface Processor)

Solar Storms Cause the Pole Shift

In the book Earth under Fire I came upon the correct theory. More precisely, in the chapter entitled "Solar Storms and Geomagnetic Flips." The astronomer Paul La Violette writes “Field flips have been accomplished experimentally, by shooting large quantities of loaded particles on a strong bipolar magnet. These particles are then caught in the magnetic fields and cause a "ring-stream" in them. At a certain moment this stream speeds up to such an extent that the field of the magnet reverses completely.”

In an equivalent scenario the field of the earth can reverse in just the same way. Astronomers know that the particles of a solar storm can compress the earth's magnetic field and temporarily speed up the power of the earth's field.

When the solar particles reach our planet, the electromagnetically-loaded particles will move in a spiral along the magnetic lines: from the magnetic north pole to the magnetic south pole and back. While passing this north-south axis, they will move into the direction of the equator. When they arrive there, they will join into a super powerful "ring current."

Everybody knows that when you change the poles of an electric motor, it will start turning the other way. The same holds for the interior of the earth. When an external short circuit takes place, the core cannot do otherwise but start turning in the opposite direction!