http://sosrff.tsu.ru/?page_id=7
For the first time in history we had an hour long blackout in the Schumann Resonance recordings.
Image taken as of now 12/11/19.

Peak electromagnetic or electrical activity in the ionosphere, it has been more intense in the past -longer time-.
https://interestingengineering.com/what-is-the-schumann-resonance
What is the Schumann Resonance?
The earth's magnetic field has a set of resonant frequencies that scientists theorize could have an effect on human behavior.

By  Trevor English
October 25, 2019
What is the Schumann Resonance?

The Earth has been the focus of a massive amount of scientific studies over the years. From the shrinking ozone layer to the changes in our planet's magnetic field, there's plenty to keep researchers busy.

One possibly surprising area of research is in the way the Earth acts like a giant electrical circuit. The atmosphere of the Earth is actually a weak conductor. If there was no source of electric charge for the atmosphere, its energy would dissipate in about 10 minutes – but it doesn't.

The ionosphere is the region of the Earth's atmosphere that starts at around 50-100km above the surface and reaches upward for several hundreds of kilometers.

Due to solar radiation, individual electrons are dislodged from otherwise neutral gas atoms in this region, creating positively charged ions. This makes the ionosphere conductive and able to trap electromagnetic waves.

Between the Earth's surface and the ionosphere is a cavity containing a total electrical charge of 500K Coulombs. There is a vertical current flow between the ground and the ionosphere. The atmosphere has a resistance of 200 Ohms and a voltage potential of 200,000 Volts.

Around the Earth, there are roughly two thousand lightning storms at any given period of time, producing around 50 flashes of lightning every second. This accounts for much of the measured flow in this electromagnetic cavity.

But what does all this mean?

It means that there is a great deal of electrical activity between the surface of the Earth and the ionosphere. Some of this is in the form of standing waves of electricity. These standing waves are known as Schumann Resonances.

Each lightning burst creates electromagnetic waves that begin to circle Earth in the cavity between Earth's surface and the ionosphere. Some of the waves - if they have just the right wavelength combine and increase in strength to create a Schumann resonance. 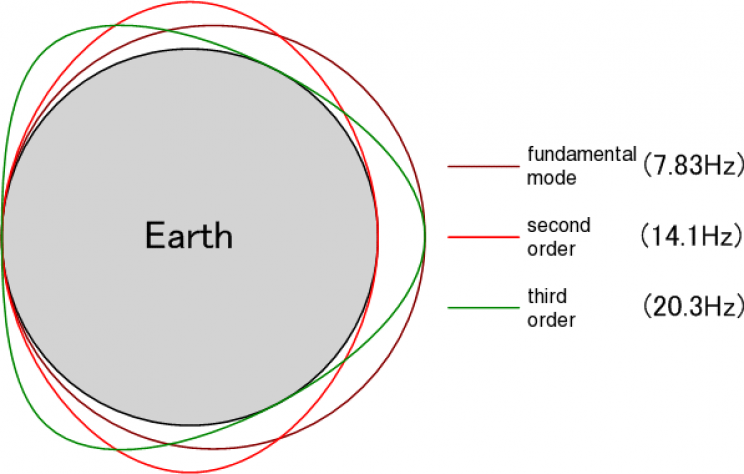 The 'sweet spot' for creating this resonance is when the wave is as long or longer than the circumference of Earth. This is an extremely low-frequency wave of up to one hundred thousand times lower than the lowest frequency radio waves used to send signals to your AM/FM radio. As this wave flows around Earth, it hits itself again in such a way that the crests and troughs of the wave are aligned.

Scientists speculate that the waves are related to the electrical activity in the atmosphere.

The base atmospheric electromagnetic resonant frequency is 7.83 Hz. This means our atmosphere is continuously resonating with a radio frequency of 7.83 Hz, along with progressively weaker harmonics at 14.3, 20.8, 27.3 and 33.8 Hz. These are what is known as the Schumann resonance.

The atmosphere was first proposed as a good conductor of electricity in 1893 by George FitzGerald. He was able to estimate that, based on the layers of the atmosphere where he saw the best conductors, there would be electromagnetic oscillations of around 0.1 seconds. He had theorized and essentially discovered the lowest mode of Schumann resonances.

Although it has been suggested that the resonances be renamed Schumann-Fitzgerald, his findings weren't well known and received little scientific discussion at the time.

A symposium to honor the life and work of Professor Theodore "Ted" Madden, who died in November 2013 at age 88, was held March 14, 2014. The event brought together the Madden family; current EAPS faculty; former colleagues; and former students, and reflected the extraordinarily broad scope of Madden's research, which extended from Earth's core to the outer magnetosphere.

Although mathematical tools for dealing with spherical waveguides were developed in 1918 by G. N. Watson, the theoretical aspects of global resonances were not substantively studied before Winfried Otto Schumann's work in 1952-1954.

Schumann, working with H. L. König, was the first to attempt to measure the resonant frequencies of the Earth. However, it was not until 1963 that some techniques were developed for extracting the exact resonance frequencies from background noise.

What does a spike mean?

The resonance can also be affected by the world's three lightning hotspots — Asia, Africa, and South America, which are seasonal and also follow a day/night cycle. Thus, the peaks of radio signal strength at the Schumann resonance follow a constantly shifting but reasonably predictable schedule.

It has also become common for some to associate the Schumann resonance with different types of brain wave states. Some have even gone as far as to relate the frequency of 7.83 Hertz to hypnosis, suggestibility, meditation, and an increase in human growth hormones. However, there is no scientific proof for any of this.

Whether it's quackery or not is still being researched, but there are some researchers who believe that our bodies can be influenced by the electromagnetic resonant frequencies around us.

So when these frequencies spike, these people believe this can also have an effect on human and animal behavior. 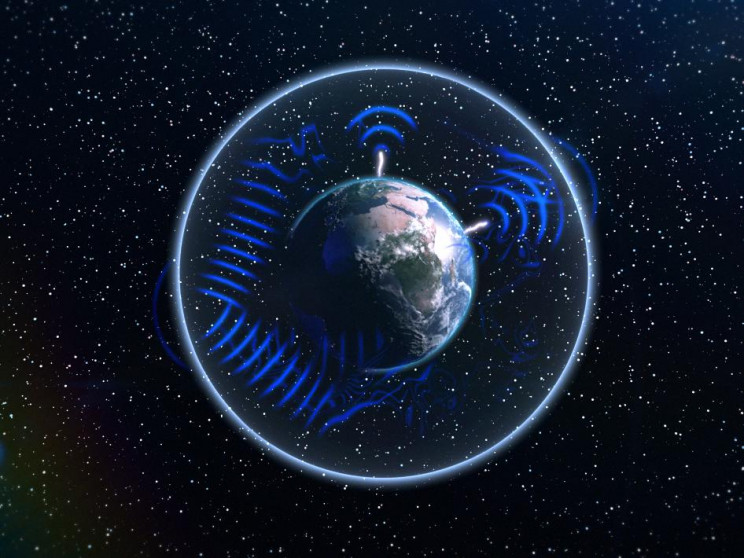 In January of 2017, the Schumman Resonance reached frequencies of above 36 Hz, which was unusual. Historically any rise about 15 Hz was considered large, so scientists were puzzled. According to some, these higher resonant frequencies on Earth are associated with more stressed, nervous systems than normal.

There's also the belief among some new age proponents that an increase in these resonant frequencies could affect humanity as a whole and cause a global rise in anxiety, tension, and/or passion.

Video abstract of the new study by the HeartMath Institute, "Long-Term Study of HRV Responses to Changes in Solar & Geomagnetic Environment," which was published in the February 2018 edition of Scientific Reports, one of the journals published by Nature magazine. The study makes a striking correlation between people’s HRV (heart rate variability) and energetic environmental phenomena such as the electromagnetic energy from the sun, the Schumann Resonance Power (magnetic waves that circle around the Earth) and energy influxes coming from outside our solar system. Click for abstract and research paper: https://www.heartmath.org/research/research-library/coherence/long-term-study-of-hrv-responses-to-changes-in-solar-geomagnetic-enviroment/

Abstract
This long-term study examined relationships between solar and magnetic factors and the time course and lags of autonomic nervous system (ANS) responses to changes in solar and geomagnetic activity. Heart rate variability (HRV) was recorded for 72 consecutive hours each week over a five-month period in 16 participants in order to examine ANS responses during normal background environmental periods. HRV measures were correlated with solar and geomagnetic variables using multivariate linear regression analysis with Bonferroni corrections for multiple comparisons after removing circadian influences from both datasets. Overall, the study confirms that daily ANS activity responds to changes in geomagnetic and solar activity during periods of normal undisturbed activity and it is initiated at different times after the changes in the various environmental factors and persist over varying time periods. Increase in solar wind intensity was correlated with increases in heart rate, which we interpret as a biological stress response. Increase in cosmic rays, solar radio flux, and Schumann resonance power was all associated with increased HRV and parasympathetic activity. The findings support the hypothesis that energetic environmental phenomena affect psychophysical processes that can affect people in different ways depending on their sensitivity, health status and capacity for self-regulation.


Although these ideas can be dismissed as having no basis in science, there is still a question of how whether the Earth's electromagnetic fields can have an effect on humans.

This question is still being studied by researchers. What do you think?

https://www.youtube.com/watch?v=XXFVpwecixY&feature=emb_logo
Why Earth's Magnetic Shield Matters
The sun has two planets in its Goldilocks zone: the Earth and Mars. The crucial difference: a magnetic field that protects us from the sun’s radiation and makes liquid water - and life - possible on Earth. | For more How the Universe Works, visit http://science.discovery.com/tv-shows
_________________
What is life?
It is the flash of a firefly in the night, the breath of a buffalo in the wintertime. It is the little shadow which runs across the grass and loses itself in the sunset.
With deepest respect ~ Aloha & Mahalo, Carol
Carol

12/6 17:00 UTC – After the incredible Amplitude spike at Power 158 other strong movements continued, the period of activity in which the Amplitude has been above 100 lasted about 1 hour, from 7:45 am to 8:45 UTC. At 10:30 UTC there was a further flicker at Power 28, after which a slight background activity continues.


Lots of good scientific info at this link: https://www.sciencechannel.com/?sf205113863=1&utm_campaign=sciencechannel&utm_content=sf205113863&utm_medium=social&utm_source=facebook#mkcpgn=ytsci1

New Show on Science: https://www.sciencechannel.com/tv-shows/unexplained-and-unexplored/
_________________
What is life?
It is the flash of a firefly in the night, the breath of a buffalo in the wintertime. It is the little shadow which runs across the grass and loses itself in the sunset.
With deepest respect ~ Aloha & Mahalo, Carol
Carol

Links for the News:
TY WindMap: https://www.windy.com
Earth WindMap: http://earth.nullschool.net
SDO: http://sdo.gsfc.nasa.gov/data/
Helioviewer: http://www.helioviewer.org/
SOHO: https://soho.nascom.nasa.gov/data/The...
STEREO: http://stereo.gsfc.nasa.gov/cgi-bin/i...
GOES Satellites: http://rammb.cira.colostate.edu/ramsd...
Earthquakes: https://earthquake.usgs.gov/earthquak...
RSOE: http://hisz.rsoe.hu/alertmap/index2.php
_________________
What is life?
It is the flash of a firefly in the night, the breath of a buffalo in the wintertime. It is the little shadow which runs across the grass and loses itself in the sunset.
With deepest respect ~ Aloha & Mahalo, Carol
Current date/time is Mon Feb 17, 2020 1:22 pm