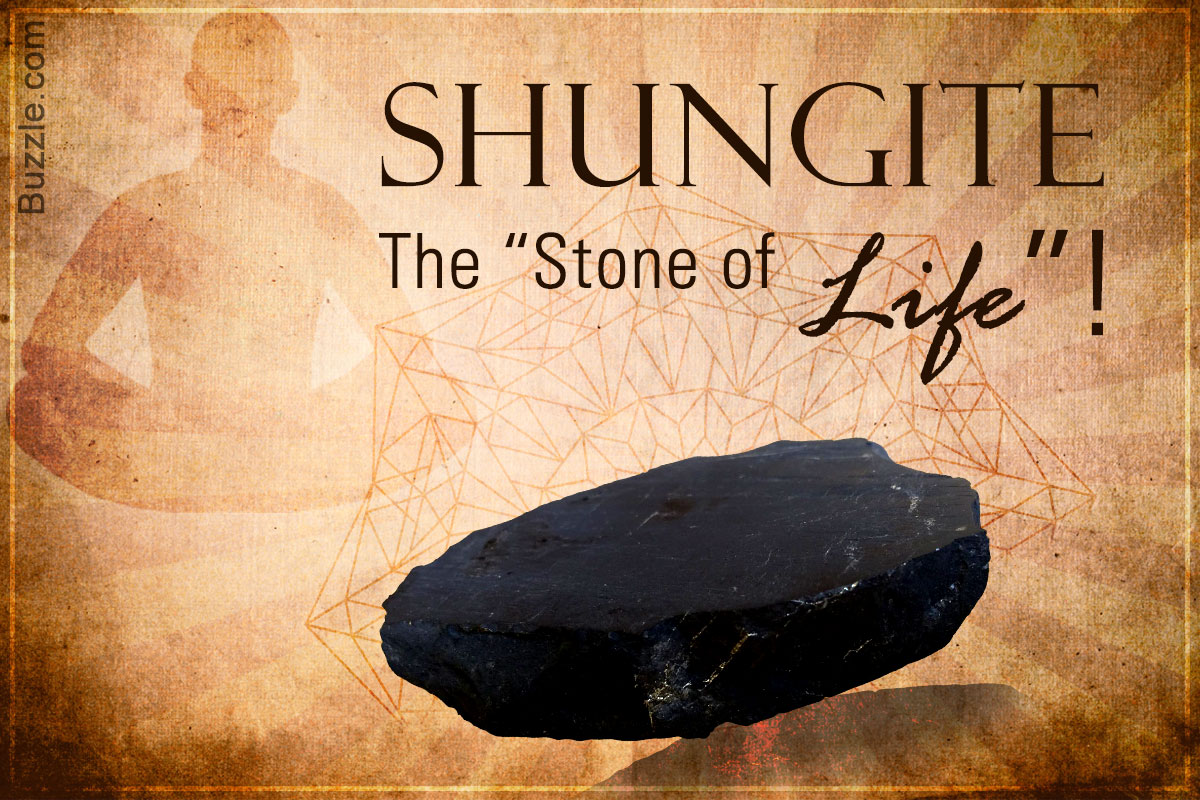 Consisting of carbon and silicate minerals, shungite is no ordinary stone. It is known to possess healing powers, and the ability to protect one from evil. Here's an overview of the history, properties, and magical benefits of this stone.


Shungite is a black, lustrous, non-crystalline mineraloid that contains fullerenes. It is the only natural source of fullerenes. It is formed by a cluster mixture of carbon, silicon dioxide, and also pyrite, iron oxide, and aluminum oxide particles. Originally meaning a mineraloid that has over 98% carbon, the term shungite may also refer to shungite-bearing rocks. Based on their carbon content, they can be classified as Shungite-1, Shungite-2, -3, -4, and -5, where Shungite-1 has the highest carbon percentage, which is 98 - 100, and Shungite-5 has only 10% carbon. Based on its luster, shungite can be classified as bright (lustrous), semi-bright, semi-dull, and dull (matte).

A unique property of shungite is its conductivity. It is attributed to the carbon nanoclusters in this stone. In its purest form, shungite is known to possess a very high conductivity. In fact, this property is the test to distinguish an authentic shungite from a fake one.

The Brilliant variety is C94, and only 1% of it is extracted of all the shungite mined. It is very hard and difficult to shape, which is why shungites of this variety are merely polished and used as pendants. Its carbon, oxygen, nitrogen, hydrogen, and ash content are as follows:
C = 94%
O, N = 1.9%
H = 0.8%
Ash = 2.2%

Shungite got its name from Shunga village in Russia where the first deposits of this stone were found. Other deposits of shungite include the one in the Lake Onega area of Karelia, Zazhoginskoye, one in Vozhmozero, and small deposits in Kamchatka and Chelyabinsk, in Russia. Deposits have also been found in Austria, Congo, Kazakhstan, and India.

Some believe that shungite was formed from the breakdown of certain microorganisms that inhabited the oceans. Others say that it might have come on the Earth from outer space on a meteorite. It is not known how this stone came to our planet.

Why Shungite is a Miracle Stone

Shungite has been put to medical use since the 18th century. It is known as the stone of life. It possesses antibacterial properties, and can be used for water purification. History has it that, Peter the Great, the ruler of the Russian Empire in the 17th century, had set up a spa in Karelia, Russia, where shungite's water purifying properties were used. It is said that he had the soldiers in his army carry a piece of shungite with them, which was probably a factor that helped the army in the Battle of Poltava.

The fullerene content of shungite is where its healing properties come from. It is believed to be a miracle stone that can help in the treatment of physical health ailments, boost mental health, and induce positive energy.

Fullerenes are powerful and long-acting antioxidants. Antioxidants react with free radicals and stop the chain reactions that can lead to cell damage and degenerative diseases. Fullerenes help normalize cell metabolism, increase enzyme activity, give stability to cells, and boost the regenerative capacity of body tissues. They have anti-inflammatory properties, and can help reduce pain and stress. Shungite, being a rich source of fullerenes, offers these health benefits to the individual using it.

When water is treated with shungite, the antioxidants in this mineraloid eliminate free radicals and other impurities in the water, and the fullerenes give it medicinal properties. It's no wonder that water bodies (springs or lakes) near the sources of shungite are known to have very pure water which has been used for healing purposes.

I use it.
mudra

Did you find it in Poland or ordered it from Russia ?
I just ordered some from a Russian site where the prices were quite reasonable
compared to the US and French ones.
Can't wait to get it.


Nancy Hopkins is a Bio/Electronic Weapons Expert and Psychic/Remote Viewer. We will discuss Shungite and its effect on bees and 5G. "....Nancy Hopkins is a researcher, author, internet radio host, producer and owner of Cosmic Reality Radio and the Cosmic Reality Shungite Store. As a US Army Intelligence Officer, Nancy was trained in concepts of the “Electronic Battlefield” and “Electronic Warfare”, where EMF and WiFi frequencies are critical components to war....The ongoing Sixth Extinction Event where collapse of the insect world will take with it civilization as it is now known. But Shungite has demonstrated the ability to save the honey bees. Can it also stop nature’s destruction by human technology?"--Nancy Hopkins


The introduction of Shungite to the beehives resulted in: our bee population grew from about 50,000 bees to over one million bees in a short 11 weeks. Shungite is a miracle mineral to save bees.