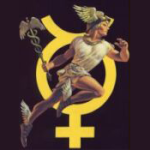 The door way through which you entered into this dimension was sexual. Sexual energy is not understood today in exoteric science and basically ignored.

The Seven CHURCHES in the Book of Revelations are the Seven CHAKRAS. The Seven Churches or Chakras are only activated when the Serpent of Fire becomes agitated and rises up the 33 (deg) vertebrae of the Spinal Column.
33 is the year Jesus Died and was resurrected.

Agitating the serpent is a sexual problem.
The serpent of fire is known as Kundalini in India or the Holy Spirit in the Bible and related to the sphere of Binah from the tree of Life.

In The Revelation to John from the bible
the Church of Ephesus is the magnetic centre of the coccyx. (MULADHARA CHAKRA)

The Church of Smyrna is the magnetic centre of the prostate. (SVADHISHTANA CHAKRA)

The Church of Pergamos is the solar plexus situated in the umbilical region. (MANIPURA CHAKRA)

The Church of Thyatira is the magnetic centre of the heart. (ANAHATA CHAKRA)

The Church of Sardis is the magnetic centre of the creative larynx. (VISHUDDHA CHAKRA)

The Church of Philadelphia is the eye of wisdom, the clairvoyant centre situated between the eye brows . (AJNA CHAKRA)

The Church of Laodicea is the crown of the saints, the magnetic centre of the pineal gland. (SAHASRARA CHAKRA)

Here is a handy image showing how the Churches and Chakras relate to each other. It is to be to embed here.

Here is a direct quote from the Master Samael Aun Weor explaining Arcanum A.Z.F. if you are interested to learn what it is. It's from the book "The Perfect Matrimony". (There are many free PDF Translations online if you search. The book contains lots of meditation exercises for how to transmute the sexual energy and how to awaken the Kundalini Fire so anyone can try it for themselves.) 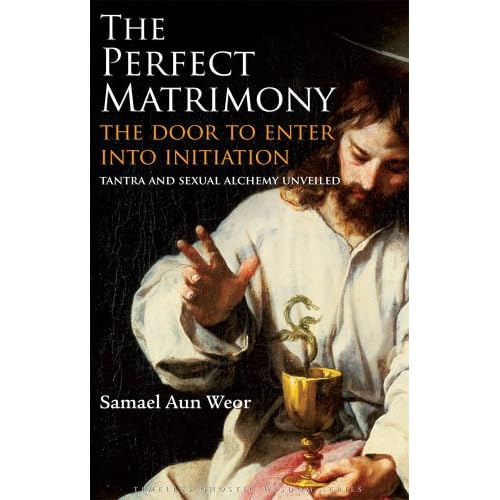 "Something is created when a man and woman unite sexually. In those instances of
supreme adoration he and she are truly one androgynous being with powers to create as
the Gods.

The Elohim are male and female. The man and woman, sexually united during the
supreme ecstasy of love, are really a terribly divine Elohim.

In those moments of sexual union we are really in the Laboratorium-Oratorium of the
Holy Alchemy.

In those moments the Great Clairvoyants are able to see the sexually united couple
enveloped in terribly divine splendors. We have penetrated, then, the Sanctum Regnum
of High Magic. With these frightfully divine forces we can disintegrate the Devil that we
carry within, and transform ourselves into Great Hierophants.

As the sexual act is prolonged, as the delightful caresses of the adorable ecstasy are
increased, one feels an enchanting spiritual voluptuousness. Then we are charging
ourselves with universal electricity and magnetism; terrible cosmic forces are
accumulated in the depths of the Soul. The chakras of the astral body sparkle, the
mysterious forces of the Great Cosmic Mother circulate through all the channels of our
organism.

The ardent kisses, the intimate caresses, are transformed into miraculous notes which
resound excitedly within the aura of the universe. We have no way to explain those
moments of supreme enjoyment. The Serpent of Fire is agitated, the Fires of the heart are
enlivened and the terrifying rays of the Father shine full of majesty upon the foreheads of
the sexually united beings. If the man and woman knew how to withdraw before spasm,
if in those moments of delicious enjoyment they had the strength of will to dominate the
Animal Ego, and then were able to withdraw from the act without spilling the semen,
neither within the womb, nor without, nor to the side, nor in any part, they would have
performed an act of Sexual Magic. This is what is called in occultism the Arcanum A.Z.F.

With the Arcanum A.Z.F. we can retain all of that marvelous light, all those cosmic
currents, all those Divine powers. Then Kundalini awakens, the sacred Fire of the Holy
Spirit within us, and we are transformed into Terribly Divine Gods. But when we spill the
semen, the cosmic currents are lost within the universal currents and the Luciferic forces
of evil, the fatal magnetism, a sanguineous light, penetrates the Souls of the two beings.
Then Cupid withdraws, weeping, the doors of Eden close, love becomes disillusionment,
disenchantment arrives, and only the black reality of this valley of tears remains.
When we know how to withdraw before sexual spasm, the Igneous Serpent of our
Magical Powers awakens.

When the Alchemist has completed his work in the Magistery of Fire he receives the
Venustic Initiation.

The betrothal of the Soul and the Lamb is the greatest feast of the Soul. That Great Lord
of Light enters her. He becomes human, while she becomes divine. From this mixture of
divine and human develops that, which the Adorable so aptly calls: “The Son of Man.”

The greatest triumph of supreme adoration is the birth of the Son of Man in the Manger
of the World.

Man and woman loving each other are truly two harps of miraculous harmony; an ecstasy
of glory that which cannot be defined be cause if it is defined it is disfigured. That is love.

The kiss is the profound mystic consecration of two Souls who adore each other, and the
sexual act is the key with which we become Gods. Gods, there is God. All of you, who
truly love, know that God is Love. To love, how beautiful it is to love. Love is nourished
with love; only with love are the alchemical weddings possible. The be loved Jesus
attained the Venustic Initiation in the Jordan. In the moment of baptism the Christ entered
within the adorable Jesus through the pineal gland. The Word was made flesh and lived
amongst us, and we beheld his glory as the only begotton Son of the Father, full of Grace
and Truth. "


Here is one place to download the book.
http://www.anael.org/descargas/books/matrimony.pdf

If this stuff peaked your interest I would highly recommend listen to the audio lectures at this site:
http://www.gnosticteachings.org/
http://gnosticradio.org/lectures/lectures-by-topic/

They are all good but I'd recommend these two series of starters:
(There is enough audio content at this site to keep you busy for a year!

Twenty-two Arcana of Tarot and Kabbalah: Here is a meditation technique I find helpful.

A Transmutation Practice: Ham-Sah
There are diverse esoteric systems for transmuting the seminal
entity into sexual energy. Certainly, the most powerful one (the
Arcanum A.Z.F.) has to be performed by a man and a woman - we are
talking specifically about the Sahaja Maithuna, sexual yoga, White Tantra ;
elsewhere we will give all the details for that practice. Now, for the
moment we are going to explain an exercise that can be practiced by
single people as well as by those who are married. I am going to tell
you the technique just now; please pay attention...
Sit down comfortably: the eastern way (cross-legged) or the western
way (on a comfortable armchair). Relax your bodies as children do.
Inhale deeply, very slowly, and imagine that the creative energy
rises through the spermatic channels up to the brain; mentally
pronounce the mantra HAM like this: HAAAAAAAMM.
Exhale, short and quick, as you pronounce aloud the mantra SAH: SAAAAHH...
Undoubtedly, you inhale through the nose and exhale through the
mouth. While inhaling, you “mantralize” the sacred syllabe HAM
(mentally, since you are inhaling through the nose); but you can
articulate the syllabe SAH with sound while you exhale.
The marvelous symbol that in the East makes the chaotic waters of life fertile is Ham-Sah, the Third Logos.
Usually, the sexual forces flow outwards from the inside in a
centrifugal way and that is why there are nocturnal emissions; when you
have a dream based on the Sexual Center, there occurs an emission, a
loss of sacred sperm or spermatic liquor...
If one organizes one’s vital systems and instead of propitiating the
centrifugal system, uses the centripetal system, that is, if one makes
the sexual forces flow inwards from the outside through transmutation,
then there are no emissions even if there may be erotic dreams.
One needs to organize one’s sexual forces if one wants to avoid
emissions; such forces are closely linked with one’s nourishment, with
the prana ,
with life - that is obvious. Therefore there is a profound relation
between one’s sexual forces and one’s breathing, so that when both are
duly combined and harmonized, they bring about fundamental changes in
one’s physical and psychological anatomy.
To make the sexual energies “re-flow” inwards and upwards in a
centripetal way is what matters; only thus is it possible to produce a
specific change in the office and functions that the sexual creative
force can fulfil. During meditation one needs to imagine the creative
energy in action, making the energy rise to the brain in a rhythmic,
natural way by means of vocalising the mantra HAM-SAH, not forgetting
to synchronize the inhalations and exhalations of air in perfect
concentration, harmony and rhythm.
Let us make it clear that inhalation has to be deeper than
exhalation simply because we need to make the creative energy flow
inwards from the outside; that is, we need to make exhalation shorter
than inhalation.
With this practice there comes a moment when all the energy flows
inwards and upwards. Clearly, the creative energy so organized - in a
centripetal way - becomes an extraordinary instrument for the Essence,
a means to awaken consciousness.
I am teaching you genuine White Tantra; this is the practice used by
the Tantric Schools in the Himalayas and the Hindustan; this is the
practice through which one can achieve Ecstasy or Samadhi, or whatever
you want to call it.
They have spoken much about the Illuminating Void
and clearly we can experience it ourselves. It is in that Void where we
can find the Laws of Nature as they are in themselves and not as they
seem to be. In this physical world we only see the mechanism of causes
and effects but we do not know the Laws of Nature in themselves,
whereas in the Illuminating Void we can recognise them in a simple,
natural way, just as they are.
We have been told that a suction pump is needed in order to form a
void; we have such a pump in the spinal column and the channels Ida and
Pingala through which the creative energy rises to the brain. We have
also been told that a dynamo is needed; we have that in our brains and
strength of will. Finally in any technique, obviously there must be a
generator; fortunately, our generator is the creative organs, sex, the
sexual force.
Having the system and all the elements, we can form the Illuminating
Void; the pump, the dynamo and the generator are the elements that we
need in order to achieve the Illuminating Void in meditation. Only
through the absolute Void can we get to know that which is real.
In fact, the Illuminating Void is produced because the creative
energies flowing inwards from the outside, impregnating the
consciousness and eventually making it leave the ego and the body.
Extracted from the ego as if out from a bottle, in the absence of ego
and outside the physical body, the consciousness undoubtedly goes into
the Illuminating Void and receives the Tao.
Therefore, the creative energy combined with meditation serves to
awaken the consciousness. Unquestionably, it draws the consciousness
out from the ego and into absorption in the Illuminating Void.
Meditation combined with Tantra is tremendous. HAM-SAH is the key...
giovonni

thank you for posting this material, especially the downloadable e-book and audio lectures
blessings to you~ gio